Derby continue to show plenty of fight at the bottom of the Championship table but they'll need more than grit to get them out of trouble. Can they take some points here? Find out with our Derby vs Sheffield United match preview with free tips, predictions and odds mentioned along the way.

Blades to sharp for Rams

Derby might be having a tough season but boy are they showing a lot of guts to fight for points. That said, even though they've lost just one of their last five games in all competitions we can't see them getting anything when Sheffield United visit Pride Park on Saturday. The Blades have been in great form of late taking 12 points from 12 in their last four league games; that includes an impressive win over Fulham last time out. Derby fans won't be relishing this game either; they've lost to Sheffield United in the last four meetings.

Our next tip for this game is that we'll be seeing fewer than three goals. Derby have gone under 2.5 goals in three of their last five games – two of which were at home – and their season average for goals per game sits at a lowly 1.9. Sheffield United have a higher average of 2.6 per game across the season as a whole but four of their past five league games have been under the 2.5 threshold. The average in that period sits at just 1.8 per game. Two of the last three head to heads have been south of the cut off mark too.

Check out the key stats & form for Derby vs Sheffield United

Derby and Sheffield United are two big clubs in the Championship but neither are having the season they would ideally be having. That said, the Blades position in mid table must look pretty attractive to the Rams right now.

Derby County look absolutely doomed to relegation but somehow they keep a glimmer of hope flickering by pulling out results. With every game that passes though they move closer to having to string wins together. When will they let loose an go all guns blazing?

Sheffield United must be wondering what might have been after their recent run of form has seen them climb just shy of the playoff hunting pack. Had they changed manager earlier they'd be in the thick of it. It doesn't help them now but it bodes well for the future and they'll see this as a wholly winnable game.

A brief FAQ ahead of Derby vs Sheffield United 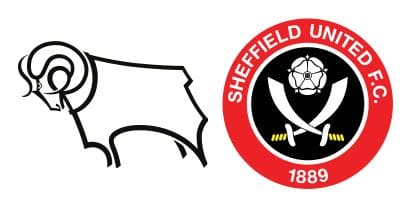