Round 21 of Bundesliga action sees surprise Champions League contenders Cologne and Freiburg face off against each other. The Billy Goats have not won in their last two outings while the Breisgau-Brasilianers arrive on the back of a win over Stuttgart.

Freiburg to Win or Draw

Freiburg to Win or Draw

Both Cologne and Freiburg are punching above their weight in the 2021/22 Bundesliga campaign. With little to separate both sides, we are in the double chance market for a Freiburg victory or a stalemate at the Rhine Energie Stadion. The visiting Breisgau-Brasilianers have won their last two outings, while the Billy Goats are winless in four fixtures. Moreover, the recent H2H statistics are in favour of the visitors who have claimed bragging rights in two of their last three meetings, drawing the other.

Backline issues are rearing the ugly head for Cologne, who have conceded 11 goals in their last five outings. Interestingly, all of these fixtures concluded with Over 2.5 scorelines, a fate that is reserved for this meeting. We base our prediction after coupling Freiburg's recent form. Four of the Breisgau-Brasilianers five matches have finished in a similar fashion, adding to our confidence. Moreover, 8 of their last 9 duels have also seen at least three goals during the 90 minutes of interaction.

Cologne vs Freiburg: Check out the best odds and the latest stats

Cologne vs Freiburg: Check out the team lineups

After knocking on Champions League qualifying slots, Cologne has returned to their indifferent form. The Billy Goats are winless in three outings, losing twice and drawing once. This has seen them bid farewell to their DFB Pokal chances and every dropped point gets them further away from UEFA competition participation.

Moving to the SC Stadion has proved to be a positive omen for Freiburg. The Breisgau-Brasilianer are one of the five teams in the heated battle for a top-four finish. Christian Streich will be confident in his charges and their renewed affirmation of the charge. The visitors arrive after successive victories against Hoffenheim and Stuttgart, and will surely want to add Cologne to their list of conquered territories.

Questions About Cologne vs Freiburg 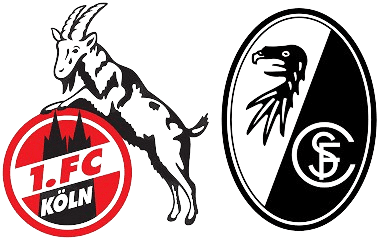 Where is the game being televised? Arena 4, Diema Sport 3, and Sky Bundesliga.

Who are the players to watch out for? Anthony Modeste (Cologne vs Freiburg).

Where is the game being played? Rhine Energie Stadion.