Top free betting tips and odds for Cologne vs Frankfurt

Cologne takes on the challenge of Eintracht Frankfurt in the final Bundesliga match on Saturday evening. Both suffered defeats in the last round and will be gunning to claim the three points on offer to get back into Champions League qualifying spots.

Frankfurt are one of the more impressive travelling sides, earning more wins on the road than at home. They have a formidable opponent in Cologne, who has earned six of their eight wins at the Rhine Energie Stadion. The Billy Goats tamed Freiburg in their last match at home and should add the Eagles to this tally after their Saturday encounter. However, the last two iterations of this fixture concluded as draws as there was nothing to separate both sides.

While it is difficult to discern who will be the winner out of the two, our money is on the Billy Goats, it is not an issue whether to predict on which end goals will be scored. Both. Neither Cologne nor Frankfurt are comfortable at the back and they have conceded ten goals apiece in their last five outings. With their strikers delivering goals at the other end, expect goals at both ends of the Rhine Energie Stadion.

Cologne vs Frankfurt: Check out the best odds and the latest stats

Cologne vs Frankfurt: Check out the team lineups

From relegation woes to fighting for the Champions League, Cologne has gone through a tremendous transformation. All praises are to be diverted towards Steffen Baumgart, whose hard work has paid off. He has found unlikely heroes in players like Anthony Modeste and is reaping the benefits of placing trust in individuals who had earlier been cast aside.

Oliver Glasner chose Europa League over Champions League participation last summer as he switched Wolfsburg for Eintracht Frankfurt. The Eagles are in a side in transition but have started to bear the shape that the 47-year-old wants from them. While their home form has left a lot to be desired, their away form is one of the best and has caused contention to their rivals this season.

Questions About Cologne vs Frankfurt 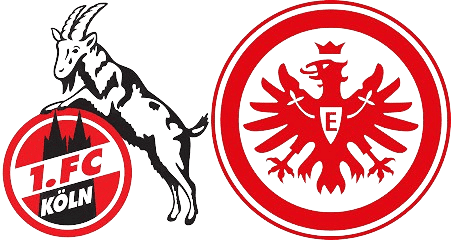 Where is the game being televised? Arena 4, Setanta Sports Eurasia, Sky Sports Football (UK/Irl), and Viaplay.

Who are the players to watch out for? Anthony Modeste (Cologne) and Filip Kostić (Frankfurt).