Top free betting tips and odds for Augsburg vs Cologne

After adding crucial three points in the last away outing, Augsburg welcomes the visiting Cologne for their next Bundesliga engagement. The Billy Goats also enter the field on the back of a league victory.

Augsburg found their winning way in the last game and got the third victory of the previous five attempts. On the other side, Cologne are on a streak of three league winnings ahead of this game. The Billy Goats have also won three of the last four away outings but Fuggerstadter will be confident over the home advantage where they recorded two wins in the last three attempts. Augsburg also won the last H2H of this season, however, given the rivals’ recent away form, we expect only a draw for Augsburg

Augsburg failed to score in the last home attempt but had an impressive drift of scoring in all of the previous home duels. Fuggerstadter has also rattled the net in all of the recent four hosting H2Hs. On the contrary, Koln’s front line has been incredible in the recent outings, scoring in all of the previous three outings. Three of the last four H2Hs at Augsburg’s home featured both teams on the scoring sides. Given the current stats, we can expect a BTTS pattern for this game as well.

Augsburg vs Cologne: Check out the best odds and the latest stats

Augsburg vs Cologne: Check out the team lineups

The Fuggerstadters cleared the lead of three more points for the safety of the Bundesliga in the previous game against Bochum. Having a total of nine wins and eight draws, Augsburg stands at the fourteenth position in the standings. Two players are injured while Mads Pedersen is on a yellow card suspension coming into this game.

The Billy Goats continued their progress and won consecutive third league games in the last duel against Arminia Bielefeld. Koln has managed 13 wins and 10 draws so far and are only one point behind the top six, standing at seventh. Sebastian Andersson will be out of the game due to coronavirus.

Questions About Augsburg vs Cologne 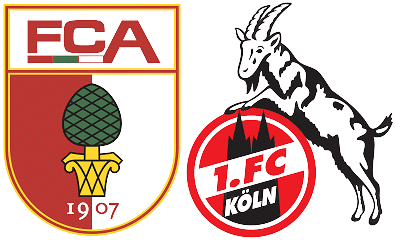 Where is the game being played? WWK Arena (Augsburg).