Boro's playoff hopes to be dented by two dropped points

Meetings between Middlesbrough and Cardiff have mostly been on the low-scoring side; six of their last seven clashes saw less than three goals scored. In the same vein, both teams have had their fair share of low-scoring games recently. Middlesbrough failed to score in four of their last five games; they managed just one goal in that five game stretch. Four of Boro's last five games went below the 2.5 goal mark, with three of those games going under 1.5. Considering Cardiff are coming off back-to-back 1:0 losses, we shouldn't expect too many goals in this match.

Here are the key stats & form guide for Middlesbrough vs Cardiff

Middlesbrough vs Cardiff: Let's look at the predicted lineups

Cardiff's season has long been over but the Bluebirds – or at least their travelling fans – will still enjoy leaving Middlesbrough's promotion hopes in tatters. Boro simply have to win this match if they want a realistic shot of making that top six.

Middlesbrough have been going through a rough patch lately; they have no wins in their last five games, with two draws and three losses. With just three games left to play, Boro are five points from the promotion playoff places; they'll need all the wins they can get, starting with this one.

Things have not gone too well for Cardiff recently; they are coming off three consecutive losses, and they have four losses in their last five games. Steve Morison's men will take on an equally struggling Middlesbrough side on Wednesday; they'll hope to put an end to their losing streak.

A quickfire FAQ on Middlesbrough vs Cardiff 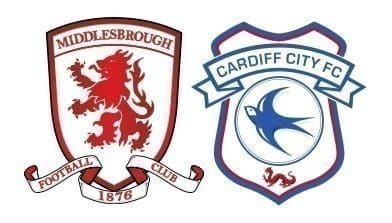