Bristol City and Sunderland go head-to-head in the Championship on Saturday, August 6th. The Robins are aiming to swoop in for three points when they face the Black Cats. Read our free predictions and find the latest odds for the fixture below in our detailed match preview.

Bristol City play their first home match of the new season when Sunderland visit Ashton Gate on Saturday. Read our top predictions for this weekend’s fixture below.

Sunderland earned a point against Coventry in their first game back in the second tier and the Black Cats carried plenty of threat while playing on the counter-attack against the Sky Blues. That ability to spring forward quickly on the break should allow Sunderland to threaten again when they visit Aston Gate to play Bristol City and with the Robins a little fragile following an opening day defeat to Hull, they could be worth opposing in the double chance market on Saturday.

Both teams rattled the net in Bristol City and Sunderland’s first assignments of the new Championship season against Hull and Coventry respectively and the same market appeals at the prices on offer this weekend. Remarkably, City have notched in 100% of their last 20 Championship fixtures at Ashton Gate, while Sunderland, who mustered five attempts on target against Coventry, wield enough bite to threaten the Robins’ ropy defence.

Top Betting Odds and Stats for Bristol City vs Sunderland

View our list of the top stats for Saturday’s contest below alongside a tool to help you choose the best odds.

Read all of the latest injury updates and team news Saturday’s Championship tussle between Bristol City vs Sunderland below.

Nathan Baker is listed as a doubt for Bristol City this week, though boss Nigel Pearson has a full squad to pick from elsewhere. Tommy Conway and Kane Wilson came on after an hour in the Robins' defeat at Hull and both players will hope to start on Saturday.

Attacker Leon Dajaku has a calf injury and is rated as doubtful for Sunderland's trip to Ashton Gate on Saturday. Luke O'Nien and Patrick Roberts were introduced from the bench against Coventry last week and both players will be pushing to feature from the start against Bristol City. 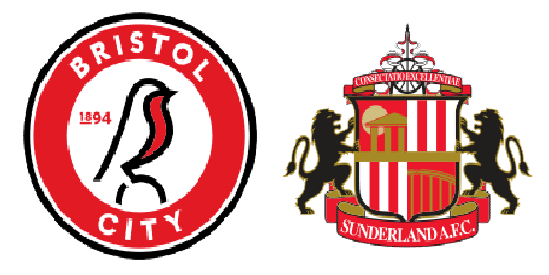 Bristol City and Sunderland drew 3-3 when they last met just over four years ago.

Who is Sunderland’s captain?