Brest locks horns with Metz in Round 8 of Ligue 1 2021/22 season. We preview this game to bring you the best match predictions as well as top betting odds for our readers.

Our Brest vs Metz Match Predictions

These teams have kicked off the new season with a lot to worry about heading into the first quarter of matches this season. Both sides have 2D and 3L in the last three games. Moreover, these teams have not registered a win this season. Our best three picks for Brest vs Metz are as follows:

Brest slipped to a 3-1 defeat in a mid-week fixture against FC Nantes after back to back draws of 1-1. In this fixture, the hosts should bounce back with home advantage and score early in the game against Struggling Metz. The visitors suffered four consecutive defeats in the last four games and failed to score in three matches.

Metz failed to score in three of their last four games, all of which were losses. On the flipside, Brest found the net in all their last four games. Home advantage and a better scoring form is why we are tipping to hosts to win the first half by at least a goal or two.

Check out the tables below for the latest team stats, the best odds and H2H details.

Match Preview: It Remains as Struggle for Brest and Metz

Brest and Metz are two struggling teams that haven’t proved much in the French Ligue 1 since the new season kicked off. This fixture presents both teams with a chance to get the first victory of the season. These teams are struggling defensively, which is a big worry for both head coaches as they look to prevent another defeat in the eighth match of the season. Brest has LDDLL in the last five games while Metz has LLLLD in as many matches. The visitors have leaked 15 goals, only one more than the hosts. A similar trend is seen is goals scored by these teams. The hosts have scored 8, one more than goals scored by Metz so far in Ligue 1 this season. 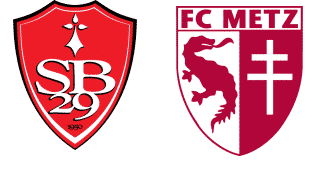 Who will referee Brest vs Metz fixture?

How did these teams perform against each other lasts season?

Both sides bagged away victory in two meetings last season.