Freiburg welcome Borussia Monchengladbach to the Europa-Park Stadion in the Bundesliga on Sunday, September 11th. Table-topping Freiburg will be determined to remain at the summit this weekend. Read our free predictions and find the latest odds for the fixture below in our detailed match preview.

Freiburg are aiming to win for the fifth time in six Bundesliga fixtures when they host Borussia Monchengladbach on Sunday. Read our top predictions for this weekend’s fixture below.

Freiburg sit proudly atop the Bundesliga after six games thanks to an impressive haul of five wins and their 3-2 triumph at Bayer Leverkusen last weekend showed that their red-hot form isn’t a fluke. More success looks possible against a temperamental Gladbach outfit on Sunday and the hosts are priced generously to prevail. With injuries and suspensions mounting, the visitors are a little depleted for their trip to the Europa-Park Stadion and Freiburg have the class and confidence to take full advantage.

Last season’s meetings between Freiburg and Borussia Monchengladbach were both high-octane affairs packed to bursting with action and incident. Freiburg won 6-0 on their trip to play Gladbach, while the return fixture produced another six goals in a pulsating 3-3 draw. Indeed, the last four encounters between the sides spawned over 2.5 goals overall and that pattern could continue on Sunday. Freiburg’s league games are averaging 3.0 goals per 90 minutes and we expect to see more of the same this weekend.

Top Betting Odds and Stats for Freiburg vs Borussia Monchengladbach

Check out our list of the top stats for Sunday’s game below alongside a tool to help you choose the best odds.

Read all of the latest injury updates and team news for Saturday’s Bundesliga meeting between Freiburg and Borussia Monchengladbach below.

Defender Kimberly Ezekwem is out with a tendon injury while midfielder Roland Sallai is currently in the treatment room with an eye complaint. Attacker Kevin Schade is out this weekend due to an abdominal issue. Freiburg carried their strong domestic form into Europe on Thursday when they beat Qarabag 2-1.

Nico Elvedi and Stefan Lainer are both out injured for Gladbach, while fellow defender Ko Itakura is suspended. Alassane Plea's absence up front is a major blow, while Conor Noss and Torben Musel are also in the physio's room, further damaging the team's options in attack. 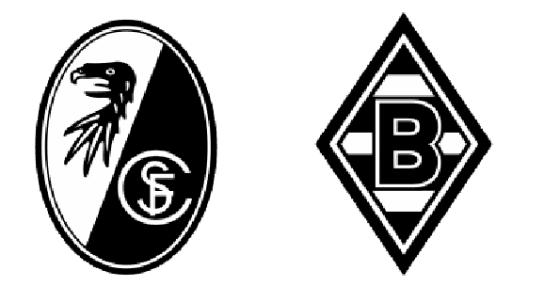 Freiburg are favourite to claim all three points this weekend, according to the bookies.

Freiburg are the surprise leaders in the Bundesliga after five games.