After a few disappointing results for the home team, the Barcelona vs Levante duel should be very interesting indeed. So, check our preview of this match if you wish to know more about it.

Free betting predictions, tips and picks for Barcelona vs Levante

While the favourite in the Barcelona vs Levante duel is obvious, there are still many betting markets to explore in this match. So, let's check them out right now:

Barcelona to Win at Half Time and Full Time

One win in the last five matches in all competitions is a truly worrying score for Barcelona, which is why they desperately need a win against Levante, a team they beat in three of their last five meetings. So, we expect Barcelona to come out to this match guns blazing and to take a lead before half-time and to win at the end.

Memphis Depay to Score at Any Time

Barcelona has been struggling to score goals a bit this season, which is understandable since they've had a lot of problems with injuries. One of their most prominent attackers due to the lack of other options is Memphis Depay and he is also on penalty duty, so we wouldn't be surprised to see him score a goal against Levante.

The latest stats and top odds for Barcelona vs Levante

If you want to bet on the best La Liga odds, check our selection of odds from the top bookies right here for the Barcelona vs Levante duel:

Barcelona vs Levante preview: Can Barca get back on track?

It was clear that Barcelona will struggle to make up for the loss of Lionel Messi, but the team has started the new season with just two wins in the first five La Liga rounds. In addition to this, Barcelona also started the new edition of the Champions League with convincing 3-0 loss to Bayern Munich, so things are far from great at the club. To be fair, Barcelona has also struggled with injuries so far and they still have a lot of players on the team's injury list, including Aguero, Braithwaite, Pedri, Alba, De Jong and a few others.

The team from Valencia is one of the only three teams still without a win in La Liga, after Alaves surprised Atletico Madrid yesterday. In any case, Levante has four draws and two losses in the first six matches in the league, which puts them barely above the relegation zone at the moment. Bardhi, Campana, Soldado, and Cardenas are currently injured and they will not play against Barcelona on Sunday. 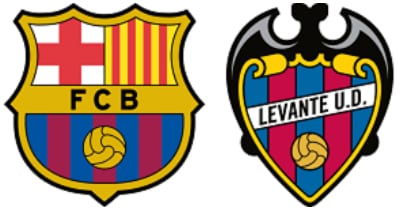