Augsburg and Hertha Berlin meet at the WWK Arena in the Bundesliga on Sunday, September 4th. Two of the league’s bottom five clubs face off this weekend. Read our free predictions and find the latest odds for the fixture below in our detailed match preview.

Both Augsburg and Hertha Berlin are still searching for their first wins of the new campaign ahead of their Bundesliga clash on Sunday. Read our top predictions for this weekend’s fixture below.

Augsburg and Hertha Berlin have both limped out of the blocks this season and neither club has managed to win a single fixture so far. However, the visitors from the capital could force a positive result of sorts against their injury-hit hosts on Sunday. Augsburg’s list of possible absentees is nine strong at present and with their ranks depleted, they look vulnerable against a side that took four points off them last term. With that considered, a stake on Hertha in the double chance market looks like a solid bet.

This season’s early evidence suggests we should expect little to no fireworks in the final third when Augsburg welcome Hertha Berlin to the WWK Arena on Sunday. Augsburg have notched just three times in four assignments so far, while Die Alte Dame have fared even worse in front of goal, registering only twice in four contests.  Just a single effort was struck when the teams last locked horns in April and we’re tipping under 2.5 goals to land again here.

Top Betting Odds and Stats for Augsburg vs Hertha Berlin

View our list of the top stats for Sunday’s match below alongside a tool to help you choose the best odds.

Read all of the latest injury updates and team news for Sunday’s Bundesliga encounter between Augsburg and Hertha Berlin below.

Augsburg have a slew of personnel issues to contend with this weekend. Felix Uduokhai, Andre Hahn, Reece Oxford, Niklas Dorsch, Dikeni Salifou and Tobias Strobl are among their absent players. Fredrik Jensen and Frederik Winther will hope to recover from minor knocks, however.

Filip Uremovic, Omar Alderete, Dong-jun Lee and Kelian Nsona are out for Hertha Berlin, while Derry Scherhant and Linus Gechter are both considered doubtful. Hertha's 1-0 loss to Dortmund last time out pushed them down to second last position in the Bundesliga table. 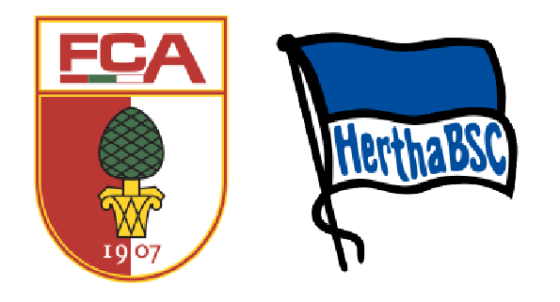 Who are the current Bundesliga champions?

Bayern Munich are the current champions in Germany having won their 10th-straight title last term.

Is this fixture live on TV?

Viewers in the UK can watch Augsburg vs Hertha Berlin live on Sky Sports Football on Sunday.