The last game of this La Liga round scheduled for Wednesday is the Elche vs Atletico Madrid duel and if you want to know more about this game, take a look at our preview of the match and our free betting tips.

Our top betting predictions for Elche vs Atletico Madrid

If you are struggling to decide what is the best bet for Elche vs Atletico Madrid, check our favourite betting tips for this duel:

After they beat their city rivals and new La Liga champions Real Madrid over the weekend, Atletico Madrid is now almost certainly going to play in Champions League next season.

However, if they beat Elche, they would eliminate any doubt, which is a pretty strong motive for the guests and one of the reasons why we expect them to win this game. In addition to this, Atletico beat Elche in their last four h2h meetings.

Although both teams scored in just two of the previous five head-to-head duels between Elche and Atletico Madrid, we can see that happening in their upcoming game.

After all, both teams have scored in 54% of the games played by both teams in La Liga this season and with the season coming close to its end, we are likely to see more goals being scored.

The best stats and odds for Elche vs Atletico Madrid

If you want to bet on the top La Liga odds, including the best odds for Elche vs Atletico Madrid, you've come to the right place:

While the guests are clearly the better team of the two, this can still be an interesting duel. So, let's take a closer look at both teams now:

At the moment, Elche has seven points more than Mallorca, the first team in the relegation zone. So, it seems safe to say that we will be watching Elche in La Liga next season as well. The team has two wins, one draw, and three losses in the last six games, which is pretty much how this season went for them overall.

When it comes to team news, Lucas Boye is out of the upcoming game through injury, while Ezequiel Ponce, the teams attacker, will have to serve a suspension.

At one point, Atletico was in danger of losing their Champions League spot for next season, but after they beat Real Madrid over the weekend and Real Betis lost to Barcelona, they are now in a much better position and only a very unlikely turn of events can get them to miss out on the best European competition.

Meanwhile, Atletico Madrid will be without injured Thomas Lemar and Joao Felix in this game and for the rest of the season, but that's all when it comes to squad issues.

The usual questions for Elche vs Atletico Madrid 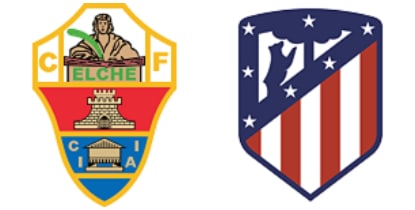