The final match of the round in La Liga is the Athletic Bilbao vs Levante duel. If you want to learn more about this game, check our preview of the match and our free betting tips.

If you are struggling to find the best bet for Athletic Bilbao vs Levante, check our top betting tips and picks for this game:

After failing to reach Copa del Rey finals for the third time in a row, Athletic Bilbao might not be in the best mood ahead of this game, while Levante is on a good run for the first time this season with two wins and a draw in the last three games.

Despite all this, we can't look past the fact that Athletic Bilbao is the better team and with them playing at home, our prediction is for Athletic to win this game.

Both teams have scored in three of the previous five head-to-head duels between Athletic Bilbao and Levante, so we expect the same to happen in their next game, especially with Levante in form.

In addition to this, both teams have scored in 46% of all matches played by both teams in the league this season, which might not be very high, but it does mean that both teams scoring is not an unusual thing for them.

The best odds and key figures for Athletic Bilbao vs Levante

If you are trying to find the top odds for Athletic Bilbao vs Levante, check our top choices of odds from main UK bookies:

This game could turn out to be very interesting, so let's take a closer look at both teams ahead of their duel:

The Basque team lost to Valencia mid-week in the second leg of Copa del Rey semi-finals, which means that they won't be playing in the final game for the third time in a row. It also means that they will have to hope for a miracle in a way to get a spot in European competitions next season since they are currently eighth in the standings and seven points behind the team in the sixth place that leads to Europa League.

On the bright side, Athletic Bilbao has no injuries or suspensions at the moment and their coach Marcelino will be able to put out the best team for the game against Levante.

After winning just one game in the first twenty three rounds of La Liga, Levante won two of their last three games and they can see the light at the end of the tunnel, barely. The team is still in the last place in the standings, but now at least they have a fighting chance of survival since the first team outside of the relegation zone is not that far ahead, just seven points.

When it comes to team news, Levante will be without Ruben Vezo, Sergio Postigo, Shkodran Mustafi, and Jose Campana, who are all injured at this moment.

The most frequent questions for Athletic Bilbao vs Levante 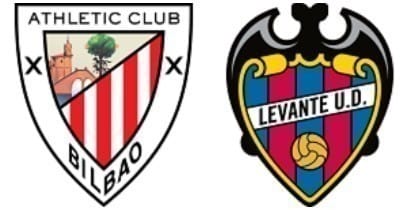