The first game to be played on Sunday in the upcoming La Liga round is the Athletic Bilbao vs Elche duel. With that in mind, here's our preview of this match and some free betting tips too.

If you are trying to find reliable La Liga betting tips, including our top betting picks for Athletic Bilbao vs Elche, we're here to help you out:

Neither of the two teams is in great form right now, but Athletic Bilbao is ahead of Elche by nine points in La Liga standings, so they've had a better season overall.

In addition to this, Athletic Bilbao is one of the best home teams in the league and they've got the better team on paper, so we expect Athletic Bilbao to win this game.

Four of the previous five h2h meetings between Athletic Bilbao and Elche have gone under 2.5 total goals and we can see that happening again on Sunday.

The best odds and top stats for Athletic Bilbao vs Elche

If you wish to bet on the highest Athletic Bilbao vs Elche odds, take a look at our selection of odds from various UK bookmakers:

While the Basque team is the favourite here, this can turn out to be a very interesting game. So, here's a more detailed look at the teams:

The Basque team is having a solid season, although they are likely end it without securing a spot in the European competitions for next season since they are currently eight in the league and seven points behind Real Sociedad who is sixth. They were also eliminated in Copa del Rey semi-finals, which was probably their best chance to secure continental football.

On the bright side, Athletic Bilbao is in pretty good shape right now since the only player due to miss the upcoming game is Yeray Alvarez, who has to serve a suspension.

With four losses in the last six game sin La Liga, Elche came back down to Earth after a string of good results before that. Still, the team is currently safely sitting in the 14th place in the standings, six points ahead of Mallorca, the first team in the relegation zone right now. So, Elche fans can hope for a stress-free end of the season.

That being said, Elche will miss a few first-team players in the next game with Johan Mojica and Antonio Barragan suspended and Javier Pastore injured at the moment.

The frequent questions for Athletic Bilbao vs Elche 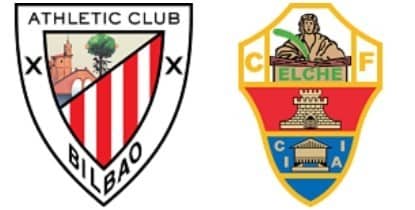