The sixty-seventh strike from Chardonnet was enough to cause a dent in Nantes' quest for a Conference League Qualifies position. Here are our top free betting tips:

Nantes won four of its recent five home Ligue 1 games, a run that features the current run-away league leaders. Nantes won the reverse fixture with a 4-1 scoreline. Angers has not avoided defeat in its recent four away Ligue 1 matches. We are tipping the hosts to win the coming encounter against Angers.

Nantes scored the first goal in four of its recent five home matches, including against the league table-toppers. Nantes exhibits its strength in the league by destabilizing teams in the first half. We expect the hosts to get on the scoreline first in the coming clash against Angers. Angers conceded the first goal in its last three away matches.  Angers conceded two or more goals in three of its recent five away games in Ligue 1. Its main challenge has been a weak defence line that lets in too many goals. Nantes scored two or more goals in three of its past five home matches. We expect the hosts to continue their goal-scoring form against Angers.

This clash will be the eleventh meeting between these sides since 2018. Read our preview below:

Nantes is becoming favourites in this fixture as it won the last two encounters with a 7-2 scoreline. There is confidence in the home camp following the hosts' recent form – winning four of the last five home encounters. Antoine Kombouare will line up his side that utilizes the wing-backs to run riots of Angers. Pereira, Moutoussamy, Pallois, and Traore are the only players who will miss the coming encounter. We expect KoloMuani to continue his goal-scoring form against the struggling travellers on 17th April 2022.

Angers' hope to get points from the coming encounter emanates from its dominance of the fixture. The Black and Whites avoided defeat by Nantes in seven of their recent ten encounters. However, one point from the possible fifteen does not sound well for a team that intends to stay in Ligue 1. Angers' main undoing is its away record. It only avoided defeat against Lorient which lies two places below it in the league table. Confidence must be record-low in Angers' camp following a recent thumping in the hands of Nantes.

FAQs about Nantes vs Angers Match 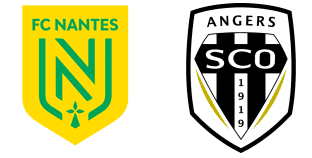 What is the kick-off for the next Nantes vs Angers?

The coming Nantes vs Angers commences at 1600hours +GMT.

Where will Nantes vs Angers game take place?

Stade de la Beaujoire will host the coming match between Nantes and Angers.

Who is Nantes’ current top scorer?

KoloMuani is Nante’s leading goal scorer with 12 goals this season.