Almeria host Osasuna meet at the Power Horse Stadium in La Liga on Monday, September 12th. In form Osasuna go in search of another three points when they visit Almeria. Read our free predictions and find the latest odds for the fixture below in our detailed match preview.

Osasuna have won three of their first four matches of the new campaign ahead of their tussle with Almeria on Monday. Read our top predictions for this week’s fixture below.

Osasuna have started the new La Liga campaign in impressive fashion, claiming victories in three of their first four matches. Positioned in a lofty fifth position in the table, confidence in their ranks should be sky high and Osasuna look primed to pounce for more points at Almeria. The hosts have won only once in four attempts since the summer and they look short on quality, especially in the final third, where they are averaging just a goal per 90 minutes. Bettors are advised to back Osasuna to outgun them on Monday.

High-flying Osasuna have been finding plenty of joy in the final third this term and they have scored twice in three of their four La Liga assignments since early August. With players like Aimar Oroz and Ezequiel Avila in great individual form, Osasuna have the tools in attack to threaten any defence at present and they are available at a big price to net over 1.5 times again when they visit Almeria.

Top Betting Odds and Stats for Almeria vs Osasuna

Check out our list of the top stats for Monday’s match below alongside a tool to help you choose the most lucrative odds.

Read all of the latest injury updates and team news for Monday’s La Liga bout between Almeria and Osasuna below.

Alex Centelles is out injured for Almeria, though fellow defender Rodrigo Ely could be back in contention to feature. Cesar De La Hoz is out until next month with an ankle injury, while Inigo Eguaras is laid low with a similar issue too.

Attacker Kike Saverio is listed as Osasuna's only injury worry at present, though he should return relatively soon. Osasuna struck late on to beat a formidable Rayo Vallecano side last weekend and they can move closer to La Liga's summit with another victory on Monday. 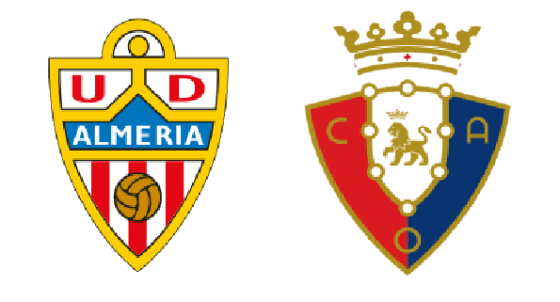 The bookies have priced Almeria as slight favourites to win on Monday.