The only game in this round of Copa del Rey in which the home team is the favourite is the Almeria vs Elche duel. So, this should be an interesting match and we have prepared a preview of it just for you.

Our favourite Almeria vs Elche betting predictions and picks

If you are searching for free Copa del Rey betting tips, we can help you out. Here are our top predictions for Almeria vs Elche:

Although they are the lower-seeded of the two teams, Almeria is rightfully the favourite in this match and we can see them progressing to the next round of Copa del Rey.

After all, Almeria is first in La Liga 2 and in great form, while Elche is fighting for survival in La Liga and they have only managed to get one win in their last six league games. With Almeria hosting the game, we expect them eliminate Elche from the cup.

Three of the last five head-to-head duels between Almeria and Elche have ended with fewer than three goals being scored and we can see the same happening again in this match.

The best odds and key figures for Almeria vs Elche

If you want to find top odds for Almeria vs Elche, check our selection of odds for this match from the best UK bookies:

Almeria vs Elche – Lineups, form, and other team news

This is one of the closest duels in this round of Spanish cup, so let's take a closer look at both teams right away:

So far so good is the best phrase to sum up this season for Almeria. At the moment, the team is the leader in La Liga 2 and betting on them to get back to the top flight of Spanish football looks like a safe bet. That being said, a lot of games have to be played and anything is possible, but Almeria currently has five points more than the third-placed team who will have to play in the playoffs for promotion.

Almeria will be without Carrico and probably Sousa through injury, while Babic is suspended and will have to miss this match. In addition to this, the team's top scorer Umar Sadiq is on international duty.

As was expected before the start of the season, Elche is one of the main candidates for relegation in La Liga. After the first half of the season, they are the first team outside of the relegation zone – only thanks to better goal difference compared to Alaves. In the last six games, Elche has one win, two draws, and three losses.

Another problem for Elche is the ongoing COVID-19 outbreak at the club. Perez, Boye, Marcone, and Benedetto are all out of the upcoming match after testing positive. Also, Gonzalez will have to serve a suspension and he will also miss this game. 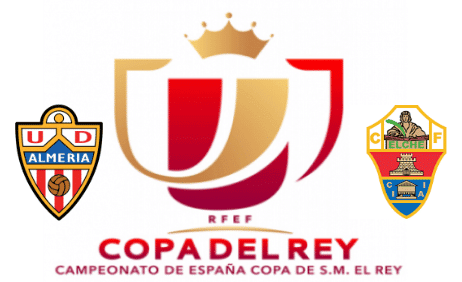