At this time in a World Cup year, we usually know not just who made it to the Round of 16, but who lifted the trophy.

World Cup 2022 in Qatar is the first one in history to be played in the winter months. So, at this point, we only just learned who will play in the Round of 16 and the stages ahead will go as far as almost reaching the end of the year.

In any case the group stages have concluded, so let's take a closer look at the teams that made it to the Round of 16 and what we can expect to happen now. 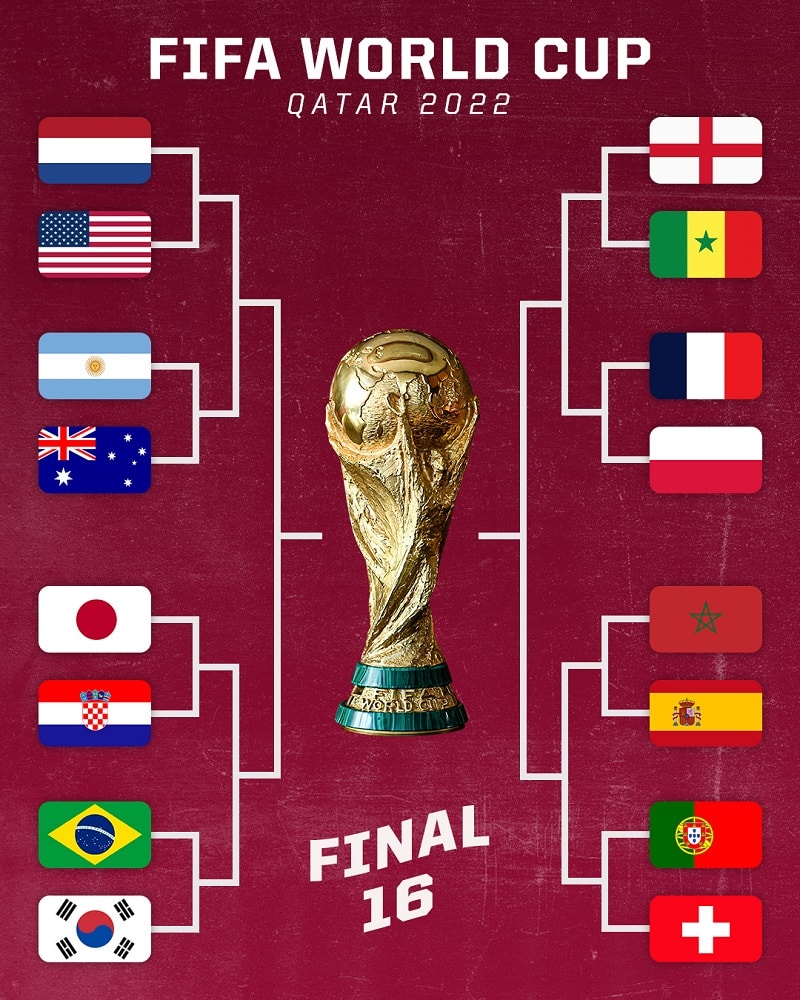 The bracket for the Round of 16 was filled based on the way that the teams performed in group stages, so before we analyze the pairs and try to predicted the winners, we should focus on the groups first.

So, let’s take a closer look at the groups and what happened in each of them.

Group A – Mostly as Expected

So, as was expected before the start of the tournament, it all came down to Senegal and Ecuador. The two teams met in the last round to determine who goes through, with Ecuador needing a point. However, they couldn't hold to a draw and Senegal rightfully claimed their spot in the Round of 16.

Group B – England and Then Everyone Else

There was little doubt about who will top this group since England is was the main favourite and clearly above all other teams in terms of quality, even taking into account their occasional letdowns at major competitions.

So, England performed as we expected and they secured the top spot with seven points. And, as we though, the fight for the second place was interesting and it came down to the last-round duel between Iran and United States. The USA won the match to put themselves into the next stage.

Although Argentina lost to Saudi Arabia to shock the world at the start of the tournament, they won their remaining two matches to claim the top spot in Group C, as was clearly expected from one of the main favourites in Qatar.

However, the battle for the second place was quite exciting and all three remaining teams had their chance ahead of the last round. But, after the thrilling 90 minutes, Poland ended up in second place thanks to a better goal difference over Mexico.

We’ve seen many times before that the current world champions don’t get out of their group at the next World Cup, but we couldn't see it happening to France in Qatar and we were right.

France managed to secure a top spot after beating Australia and Denmark in the first two rounds and it left the other three teams to fight for the second place. To the surprise of many, Australia managed to beat Denmark in the last round to claim their spot in the Round of 16.

Group E – Another Disappointment for Germany

Not many people expected Japan or Costa Rica to surprise us in this group, given the fact that Germany and Spain were here as well. And while the Spain started the tournament with a 7-0 win over Costa Rica, Germany lost to Japan in the first round.

However, after Japan lost to Costa Rica and a draw between Germany and Spain, all four teams had a chance to get to the next stage. In the last round, Germany beat Costa Rica, but Japan beat Spain, eliminating Germany in the process.

Group F – The “Group of Death”

Clearly one of the toughest groups at 2022 World Cup was Group F, featuring two of the top three teams from the last World Cup in Russia, Croatia and Belgium, and a very good Moroccan team. Canada, a young team full of potential, had very little chance to do well in such a group.

And while Canada showed flashes of quality, they ended up losing all of their matches. Surprisingly, Marocco ended up topping the group with seven points, leaving Croatia and Belgium to battle for the second place. Thanks to Lukaku and his misses in the final round, Croatia drew with Belgium and

In the last World Cup in Russia, Brazil, Switzerland, and Serbia were all in the same group, just like now. The only difference is Cameroon, which is now among the teams instead of Costa Rica. Brazil was clearly the favourite, with Serbia and Switzerland likely to fight for the second place.

Group H – Leaving It Until the Final Seconds

While Portugal secured their place in the Round of 16 with two wins in the first two matches, the other three teams all had a chance to get to the next stage ahead of the last round, with Ghana in the best position.

However, Ghana lost to Uruguay, which put the South American team ahead of them. But, South Korea scored a winning goal against Portugal in the last minutes of the game, which propelled them to the second place and the next phase.

So, we covered the groups in detail and now it's time to offer our predictions for each of the pairs in the Round of 16:

With all due respect to the USA and their exciting team, Netherlands is the better of team of the two. Many feared that they will lack offensive firepower, but Cody Gakpo proved the doubters wrong and scored three goals in the group stages. So, we expect to see an interesting game, but Netherlands should make it to the quarter finals from this game.

Place the bet with Stake >>

The shocking loss to Saudi Arabia at the start of World Cup seemed to have woken Argentina up and they've looked like a different team since then. Meanwhile, Australia can be very happy to even reach this stage given the overall quality of their team. Clearly, there is little doubt about who gets to the next stage from this pair and that's Argentina.

This is another matchup in the Round of 16 where the winner is all but decided. With all due respect to Poland, they barely got to this stage as well and now they have to face the defending world champions and one of the best teams in the world. So, we don't see how this match can end well for Poland and it should be just another game for France on their way to defending the title.

Place the bet with Ladbrokes>>

While England cruised to this stage, Senegal struggled to get the win against Ecuador to claim the second place in their group. They managed to do it, but their run should end in this stage. After all, Senegal is without their best player Sadio Mane and while they had enough quality to beat Ecuador, we don't see them resisting England in this match.

Place the bet with WilliamHill>>

One of the more interesting matchups in this round is the duel between Japan and Croatia. Japan surprised everyone by beating Spain and Germany to claim the top spot in their group, while Croatia eliminated Belgium to reach the knockout stages. That being sad, Croatia is the vice-champion from World Cup 2018 and they have tons of experience, so we see them getting to the quarter-finals in Qatar.

Place the bet with Betfred>>

Getting to this stage from a group with Portugal, Ghana, and Uruguay is a success already for South Korea and given the fact that they will have to meet Brazil now, it's likely the end of the round for them. The Brazilians are one of the main favourites to win the tournament, so we can't see them slipping against a team like South Korea, with all due respect to Son and friends.

Place the bet with SkyBet>>

This is one of our favourite matchups in the Round of 16 since Morocco showed by finishing ahead of Croatia and Belgium that they are a very good team. On the other hand, Spain is one of the favourites here and so this can be a very exciting game. In fact, we wouldn't be surprised to see overtime or even penalties, but in the end, we feel that Spain is more likely to go through

Place the bet with BetVictor>>

Probably the closest pair in the Round of 16 is Portugal vs Switzerland. These two teams already played twice this year in UEFA Nations League, splitting wins at their home grounds. Both teams also had a couple of wins and a loss in their respective groups, so we expect a very close and exciting game. In the end, we can see Switzerland prevailing and getting the win, probably in overtime or after penalties.

Place the bet with Unibet>>

When Will the Round of 16 Start?

How Long Will Round of 16 Last?

This round will last for four days, until December 6th. Each of the four days we will see a couple of matches being played.

Do We Know the Kick-Off Times for Round of 16 Games?

Where Can I Watch Round of 16?

You will be able to watch these games on BBC and ITV if you live in the UK.