Wimbledon and Ipswich are due to play a game that could determine the faith of both teams. Read our preview to find out more about this match and why it is so important for the two teams, along with our League One betting tips.

Free betting predictions and tips for Wimbledon vs Ipswich

This match is one of the closest ones in this round of League One, so it's hard to offer a safe bet here. However, we have found a few betting tips that we really like, so check them out:

Odds are subject to change, so check them with your bookie before you make your bet. Our recommended bookmaker for this match is Ladbrokes.

Wimbledon and Ipswich to Draw

Since this match is of huge importance to both teams, it is hard to offer a prediction of what could happen. Furthermore, neither team is in spectacular form and they've been pretty inconsistent lately. With that in mind, we expect a careful approach from both teams, which often results in a draw. Furthermore, the first match this season between Wimbledon and Ipswich ended in a scoreless draw.

As we already mentioned, the first game between these teams in League One this season ended 0-0 and we feel that this could very well repeat itself. First of all, Ipswich has played 0-0 in three of their last five matches, so they are obviously not averse to playing without many goals. In addition to this, Wimbledon has gone under 1.5 total goals in three of their last five games as well. However, this is a bit risky bet, so you may want to stick to under 2.5 total goals if you want a safer bet.

Our next prediction draws from the previous two, but it is much safer than the other two tips we have provided. In addition to all that we have already mentioned, games that include Ipswich end in both teams scoring only 41% of the time. Wimbledon is a bit better in this regard with both teams scoring in 51% of their games, but we still like this bet when all things are taken into account.

Top odds and important stats for Wimbledon vs Ipswich

We have selected odds for the best UK bookies so you can find the best odds in one place:

Wimbledon vs Ipswich preview – An important game for both teams

With seven games left to play, Wimbledon is getting ready for a stressful fight for survival. The team is currently just outside the relegation zone with one point ahead of Wigan and Bristol Rovers and two points ahead of Swindon. In the last five games, Wimbledon has two wins, a draw and two losses, which is not that bad. And they've beaten Accrington 5-1 as guests over the weekend, so they have reasons to be optimistic.

Meanwhile, Ipswich is still hoping to make it into the playoffs, but the team has to improve compared to their recent form since they have only managed to get one win in the last five games. And while they only lost once as well, getting draws won't be enough to push them into the playoff zone. In addition to this, Ipswich is currently dealing with a few injuries, although the team got back Tristan Nydam after extended time on the injury list.

Frequent questions for Wimbledon vs Ipswich 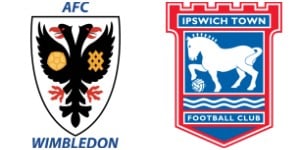