Newcastle go in search of their fourth straight win in the Premier League this weekend but the hosts, West Ham, are enjoying another fine season in the European places and should prove a tough nut to crack.

We're backing West Ham to put an end to Newcastle's winning run on Saturday. When the pair locked horns in August for their reverse league fixture, West Ham claimed a 4-2 win at St James's Park. The Hammers have picked up three wins from their last six matches in all competitions, winning two of their last three home games.

Saturday's clash looks set to be close and competitive throughout and we're backing under 2.5 goals to be scored during the 90-minutes. Under 2.5 goals have been scored in three of West Ham's and five of Newcastle's last six outings in league and cup, so you can see why we're expecting a low-scoring affair on Saturday.

All you need to know about West Ham vs Newcastle

Can the Magpies make it four wins on the run this weekend?

West Ham made the trip to Leicester last weekend where a goal from Bowen in the 10th-minute put the visitors in front. Leicester responded well and were back on level terms before the break via a Tielemans penalty and then went in front in the 57th-minute through Pereira. West Ham kept on pushing and just when the game looked out of their reach, defender Dawson popped up with a stoppage-time equaliser. The Hammers sit 4th in the table, 8pts behind Chelsea in 3rd, and could slip down two places if they failed to beat Newcastle and both Arsenal and Man Utd win their games.

Newcastle made it three wins on the bounce when they played host to Aston Villa last time out. A first-half free-kick from Trippier proved enough to win the game as Aston Villa failed to impress during the 90-minutes and had a goal chalked off for offside in the second half. The magpies are out of the drop zone as things stand and will be hoping to secure a win and move above Everton and Leeds this weekend.

West Ham: Zouma, Bowen, Ogbonna and Masuaku are the main concerns for the hosts this weekend.

Newcastle: Fernandez, Hayden, Lascelles, Manquillo. Ritchie, Wilson and Lewis could miss the trip to the capital. 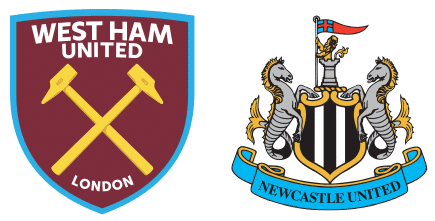