Chelsea don't have a chance of lifting the Premier League title this season due to the advantage both Man City and Liverpool have over them heading into the business end of the campaign but they still need to make sure of 3rd-place as Tottenham and Arsenal are just 5pts behind them. West Ham could still qualify for Europe through their league position but their best chance could be via the Europa League with their first game against Frankfurt coming up next after the trip to Stamford Bridge.

With West Ham having one eye on the Frankfurt game, we're backing Chelsea to win and for both teams to score in the process. Chelsea have won three of their last six league meetings with the Hammers and both teams have scored in two of the pair's last four meetings in the Premier League. Both teams have also scored in four of Chelsea's and four of West ham's last six outings in all competitions, so you can see why we're not backing either side to keep a clean sheet on Sunday.

Havertz has been one of Chelsea's best players this season, netting 7-goals in the league alone having been transformed into a striker under Tuchel and keeping Lukaku out of the starting eleven. The German international was rested in midweek but should return to the starting lineup this weekend and we're backing him to score against the Hammers just as he did in his last league start against Southampton.

All you need to know ahead of Chelsea vs West Ham

Will West Ham have one eye on their Europa League semi-final?

Chelsea made some forced changes to their side and rotated a couple of key players for the midweek home game against Arsenal, and it cost them dearly. Arsenal ran out 4-2 winners in the end, cancelling out goals from Werner and Azpilicueta. Tuchel will be demanding a response from his players following that defeat, so West Ham had better watch out.

West Ham were both lucky and unlucky in their last game at home to Burnley. The match ended in a 1-1 draw but could have gone wither way with Cornet missing a penalty to make it 2-0 to the visitors and Soucek then going on to equalise for West ham in the 74th-minute. The Hammers had plenty of chances to win the game but weren't clinical enough in front of goal.

Chelsea: Kovacic, Rudiger, Christensen, Hudson-Odoi and Chilwell could all miss out this weekend due to injury.

West Ham: Zouma, Diop and Ogbonna are expected to miss the trip to Stamford Bridge through injury.

Q&A for Chelsea vs West Ham 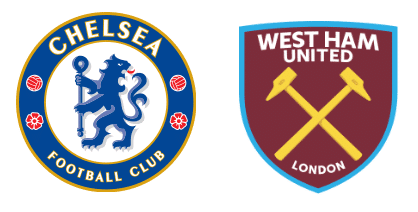