Varnamo meet AIK for the very first time this weekend and the hosts will be expecting a tough 90-minutes against a team that sits ten places and 15pts clear of them in the Allsvenskan table.

We're going with an away win this weekend as AIK are flying in the Allsvenskan this season and look like they could claim the title. The visitors returned to winning ways last weekend after a disappointing run of results, while Varnamo have lost four of their last five matches in all competitions, going down 5-0 away at Djurgarden last time out.

There is a good chance that this game will be low-scoring judging by both teams' recent results. Four of Varnamo's last six outings in all competitions have ended with fewer than three goals being scored, while three of AIK's last four league games have produced under 2.5 goals.

All you need to know ahead of Varnamo vs AIK

Varnamo would have been expecting a tough game away at title-chasing Djurgarden but they might have hoped to keep the scoreline respectable. Djurgarden took the lead in the 15th-minute and never really looked back from that point on, doubling their advantage on the half-hour mark. Just 7-minutes into the second half and Djurgarden moved three goals clear and in the 67th-minute it was 4-0. The home side found room for one more goal in stoppage-time to wrap up a very convincing 5-0 victory.

AIK were made to work hard for all 3pts at home to Kalmar last time out. Lustig put the home side 1-0 up in the 40th-minute after good work from Otieno who claimed the assist. The hosts would have been hoping double their lead in the second half but a second goal never came. However, it didn't matter at the end of the day as Kalmar failed to carve out an equaliser and the scoreline ended 1-0.

Varnamo: the hosts have no fresh injury concerns or suspended players for the game against AIK.

AIK: Bilal Hussein is suspended for this game, while Nabil Bahoui and Per Karlsson look set to miss out through injury. 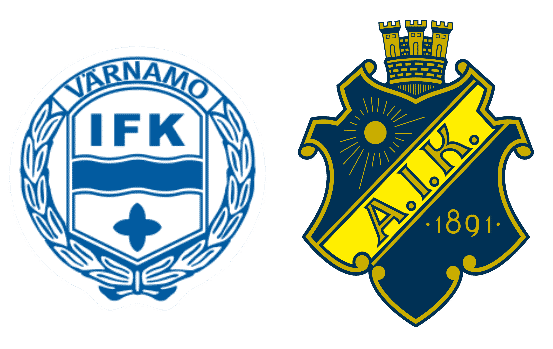