The first match to be played on Sunday in the upcoming La Liga round is the Valencia vs Real Sociedad duel, so let's take a closer look at this game and what we expect to happen in it.

Our favourite Valencia vs Real Sociedad betting tips and picks

If you wish to check our free La Liga betting predictions, including our top picks for Valencia vs Real Sociedad, you've come to the right place:

Although we have seen three or more goals in just two of the last five h2h duels between Valencia and Real Sociedad, we expect this to be the case when the two teams meet on Sunday.

The main reason lies in the fact that Valencia averaged 3.23 goals per game in La Liga this season, which is the highest average in the league. Meanwhile, Real Sociedad averaged just 2.05 goals per game, but we have a feeling that this will be a high-scoring match.

Once again the recent h2h history between Valencia and Real Sociedad doesn't suit our prediction since both teams scored in just two of their last five meetings.

However, both teams have scored in a whopping 77% of all matches played by Valencia in the league this season, which is enough for us to overlook the fact that the same thing happened in just 33% of all Real Sociedad games in La Liga until now.

The latest stats and odds for Valencia vs Real Sociedad

You don't have to spend a lot of time searching for the top Valencia vs Real Sociedad odds – you can find them all on our website:

This is one of the closest duels in this round of La Liga, so let's take a closer look at both teams before they meet on Sunday:

This game comes just a few days after the Bats secured a spot in the semi-finals of Copa del Rey with a win over Cadiz, so the team is certainly in good mood right now. However, Valencia is without a win in La Liga in the last four matches, which is not surprising since they've been playing in series the entire season. Still, the team is tenth in the standings and not that far from teams competing for a spot in Europe next season.

When it comes to team news, Valencia will be without Jasper Cillessen, Gabriel Paulista, and Omar Alderete, who are all injured at the moment. On the bright side, Bryan Gil could be making his debut for the team.

Unlike their upcoming opponent, Real Sociedad failed to reach the Copa del Rey semi-finals after suffering a heavy 4-0 loss at home, at the hands of Real Betis a few days ago. The team is also far from great form in the league as well since they only managed to get one win in the last six games. Despite that, Real Sociedad is still in the sixth place in La Liga standings.

Ander Barrenetxea, Carlos Fernandez, and Nacho Monreal will miss the upcoming game with injuries and fitness issues. Other than them, Real Sociedad is in good shape. 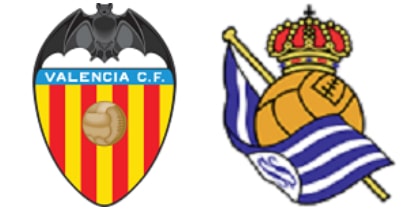