Perhaps one of the more interesting matches in the upcoming round of La Liga is the Valencia vs Barcelona duel, so check our preview of this game and our free betting predictions.

Our favourite Valencia vs Barcelona betting tips and picks

If you want to check out the best La Liga betting tips, including our top predictions for Valencia vs Barcelona, you came to the right place:

Four of the last five h2h meetings between Valencia and Barcelona have gone over 2.5 total goals and we can see that happening again on Sunday. Furthermore, the two teams averaged a whopping 4.40 goals per game in those five matches.

Both teams have scored in four of the previous five head-to-head duels between Valencia and Barcelona and we would be surprised if that doesn't happen in their next game as well.

On top of this, both teams scored in 75% of all Valencia matches in the league this season, while the same is true for 65% of all Barcelona games in La Liga so far.

The latest stats, odds, and more for Valencia vs Barcelona

If you want to check out the best odds and stats for the Valencia vs Barcelona duel, you can find them all right here:

This can be a very exciting game, so let's take a closer look at both teams before they meet on Sunday:

The Bats are on a very poor run at the moment since they failed to win in the last six games as they recorded three losses and three draws in that period. However, the team is in the semi-finals of Copa del Rey and they managed to draw with Athletic in Bilbao in the first leg, so they are in good position to reach the final.

When it comes to team news, Valencia is without Gabriel Paulista and Jasper Cillessen, who are injured. However, other than them, Valencia has a clean bill of health and they can field their best team against Barcelona.

Blaugrana was only second away from a loss in the city derby against Espanyol over the weekend, but they scored a goal in stoppage time to secure at least a draw. The team is without a loss in the last eight La Liga matches and they are currently fourth in the standings. Barcelona also drew with Napoli in their mid-week Europa League clash, so they will have to chase the win in the second leg to progress further.

Ronald Araujo, Samuel Umtiti, Clement Lengled, and Sergi Roberto are out of this game with injuries, while Ansu Fati and Memphis Depay are questionable. Also, Gerard Pique and Dani Alves will miss the game through suspension.

The usual questions for Valencia vs Barcelona 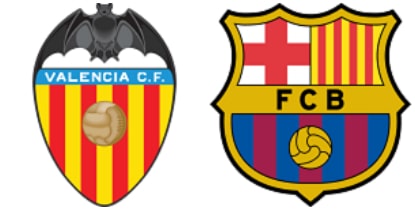