Utrecht will have a tough task this weekend playing against in-form Sparta at their home stadium after losing two matches in a row.

Their h2h record speaks volumes about their tradition of scoring goals. The last three matches were true goal bonanzas, and with the way Sparta is playing, another goal-scoring effort is at hand. Utrecht will try to recover after a bad loss at PSV, their defense will be further tested.

Sparta has done a great job of playing good football against weaker opposition, and going away to an opponent who suffered a bad loss a week ago will give them the confidence to further maintain their good run of form. It seems, statistics-wise, there aren't many differences between these two teams.

What you need to know about Utrecht vs Sparta Rotterdam

Utrecht had a tough time playing against two of the best sides in the Eredivisie, first losing at home to AZ Alkmaar 2-1, then being trashed in Eindhoven against PSV 6-1. Additional problems come from their home form, they have registered only one win in front of their fans, and a month ago they beat Vitesse by a single goal. In five home matches, they scored only two goals, which shows that this team has certain problems that need to be addressed. Their best striker is a familiar name, Bas Dost scored five goals this season. Anastasios Douvikas is a close second with four goals. A positive note for Utrecht is that they don't have any injury problems at the moment which will be good news for coach Henk Fraser.

There could be any number of scenarios in this match, but one stat holds its ground. Sparta hasn't beaten Utrecht in 14 years, the last win coming in 2008. But Sparta is playing good football at the moment, they are in the sixth position with three wins out of their last four matches. They have a five-point advantage over Utrecht. The most important thing for Sparta is that their defense provides a good safety net behind the midfield line. There were some shaky reactions, but the form of the back line is improving each game.

Utrecht: No news to report.

Sparta Rotterdam: Tim Coremans and Laurent Jans are doubtful, and Younes Namli will miss the game because of an injury.

Notes about Utrecht vs Sparta Rotterdam 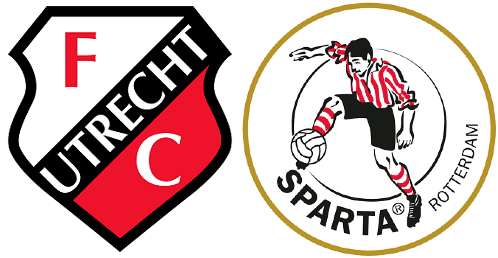