One of the more interesting matches in the upcoming round of the South American WC Qualifiers is the Uruguay vs Ecuador duel. With that in mind, we have prepared a detailed preview of the match for you.

Our free tips and predictions for Uruguay vs Ecuador

If you are searching for the right bet for the Uruguay vs Ecuador game, check our favourite betting tips right here:

The last four duels between Uruguay and Ecuador have ended with the home team taking the win, so we expect to see the same in this game as well. Both teams are in good form and they are separated by just one point in the standings, so it should be an interesting match. However, Uruguay is the better team on paper and our prediction is for Uruguay to win.

Both teams have scored in three of the last four h2h duels between Uruguay and Ecuador and we expect to see something similar in their upcoming match. Also, 50% of all games played by these two teams in the WC Qualifiers have ended with both teams scoring, so there's no reason to doubt that both teams can find the net in this game as well.

The best stats and odds for Uruguay vs Ecuador

You can find the top odds for the Uruguay vs Ecuador duel on our site, taken from the best UK betting websites:

Uruguay vs Ecuador preview: Derby of the round

It was a not the best summer for Uruguay since they only reached the quarter-finals at Copa America, in which they were eliminated by Colombia on penalties. Things are a bit better for them in the WC Qualifiers where the team is currently in the fourth place, with three wins, two draws, and two losses and the team is obviously on good course to getting to Qatar.

While the people probably expected more than the quarter-finals at Copa America this summer, Ecuador actually did well in that competition and they were eliminated by Argentina, the eventual champions. Also, the team is doing very well in the WC Qualifiers with four wins, one draw and three losses in the first eight matches, which is enough to put them in the third place in the group.

The most common questions for Uruguay vs Ecuador 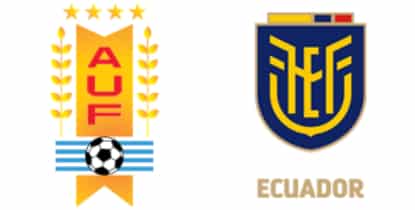