Sunday's Bundesliga action kicks off with a top-four clash between Union Berlin and Dortmund. Both sides stuttered last weekend and will be looking to get back to winning ways at the Stadion An der Alten Försterei.

Before their 2-0 defeat to Augsburg, Union Berlin had been on a six-match unbeaten run. It saw them overcome their jinx against Hertha Berlin at the Olympiastadion and they will want to get back to winning ways against Borussia Dortmund. Der BVB has been inconsistent on the road, winning just four times in their last ten away fixtures. Their rips to the Stadion An der Alten Försterei have not been fruitful as they have never won there. With Union in good form and Dortmund struggling on the road, we are backing a home win in this fixture.

Marco Rose has a plethora of attacking outlets at his disposal and likes to make the most of their availability. This sidetracks them in their outings against defensive units, who have hit them on the counter. This will be the game plan for Union, who enjoy their top-four position with a +2 goal difference, far inferior to the +18 of their rivals. With Der BVB conceding at an average of 1.71 per match, we should see Gregor Kobel picking the ball out of his net. A similar fate will be enjoyed by Andreas Luthe as he faced Erling Haaland and Marco Reus.

Union Berlin vs Dortmund: Check out the best odds and the latest stats

Union Berlin vs Dortmund: Check out the team lineups

It is shaping to be a season to remember for Union Berlin fans. The Iron Ones are enjoying the fourth place and have a genuine shot at qualifying for the next iteration of the Champions League. The fact that Urs Fischer has managed it without delving too much in the transfer window makes this achievement all the more impressive. However, there are concerns with respect to their attacking output as they have the worst scoring efficiency in the top-10.

While Union Berlin has forged their path to top-four on the toils of their defence, Borussia Dortmund has managed it thanks to their attacking brilliance. Erling Haaland continues to bag in goals every week and has been in good company with Marco Reus and Thorgan Hazard enjoying prolific campaigns. They have a five-point advantage over Leverkusen and will be confident of finishing runner ups to Bayern Munich.

Questions About Union Berlin vs Dortmund 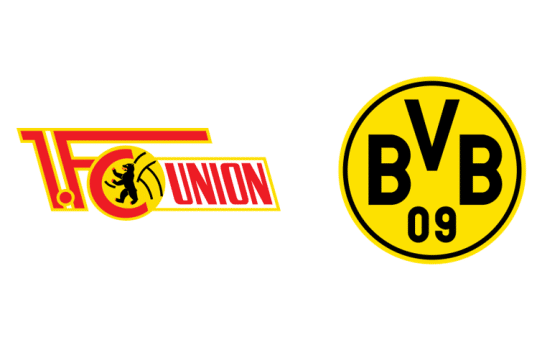 Where is the game being televised? DAZN Deutsch, Sky Sports Football (UK/Irl), Tivibu Spor, and Viaplay.

Where is the game being played? Stadion An der Alten Försterei.