Troyes and Nice will lock horns in the 13th competitive encounter since September 2002. We preview this game to provide Football Whispers with the best French Ligue 1 predictions, betting odds and free tips.

Our Free Troyes vs Nice Predictions

Since earning a promotion to Ligue 1, Troyes has only 1W in the top flight. The hosts have also bagged 3W and 5L in the first nine matches. Can they high-flying Nice from getting their sixth victory in 10 games? Here are our best three Troyes vs OGC Nice predictions with NetBet:

Note: Odds from NetBet are subject to change.

In the last 12 meetings, Nice recorded 6W, 3D and 3L. It means they boast a better record against the hosts. In the current Ligue 1 season, Nice has leaked only 4 goals in nine matches while Troyes has conceded 14 goals in as many games. The visitors should comfortably trounce Troyes to get their first back to back victories over the promoted side.

Our second prediction backs goals on both ends. Despite defensive woes that have condemned Troyes to a relegation battle early in the season, the hosts have been scoring goals at home. They kicked off the season against PSG and scored in a 2-1 loss. They also scored in their second match at home against Monaco, a game Troyes lost 2-1. The hosts bagged a 1-1 draw with Montpellier in the third home game and a similar result against Angers. We think the hosts have decided to collect as many points as possible on home soil even if it means scoring at least a goal.

Our third prediction for this match backs OGC Nice to score the first goal. Looking at the defensive records of both teams after nine top-flight games, Troyes looks vulnerable defensively will likely concede the first goal on matchday.

Troyes vs Nice: Bookies with the Best Odds, H2H and More Stats

We have summarized the latest stats and the best odds as seen in the tables below.

Troyes faces another hefty assignment against in-form Nice in the 10th game of the French Ligue 1 2021/22 season. The hosts hope they can keep scoring at home. Troyes has six points in nine games, and two of those points have been collected at home. It shows that a lot still lack in their quest to remain in top-flight next season. The hosts have 2D and 2L in four home games so far hence getting the first home win should be top of the agenda for head coach, Laurent Batlles. OGC Nice is currently ranked third in away standings after four trips during which they secured 3W and 1L. Nine points collected on the road means Nice is doing better away. 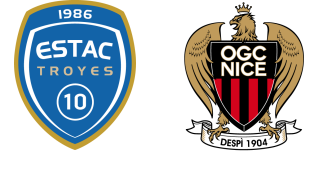