Top 10 players with most penalty goals in Premier League history Scoring a penalty is often the most difficult task in the world for many footballers, with nerves playing a huge factor when lining the ball up from 12 yards.

Other players, however, simply have a knack for scoring penalties, and could find the back of the net from the spot in their sleep.

Here are the top 10 players with the most penalty goals in Premier League history:

Undoubtedly one of the best left-backs in Premier League history, Everton legend Leighton Baines perhaps wasn’t as attacking as some of his modern equals today, but he certainly knew how to strike a ball.

The full-back found the net 32 times in 420 top-flight matches for the Toffees and Wigan, scoring 20 penalties along the way.

Crystal Palace’s Luka Milivojevic is certainly not known for his goals, with the midfielder scoring just 28 times from 171 matches with the Eagles, with 22 of those coming from the spot. Three of his strikes have been free kicks, meaning he’s found the net just three times from open play.

The Serbian has been a great servant for the club, and is now in his seventh season. Appearances this time around have, however, been few and far between, with all six of his matches this season coming from the bench.

Ex-Manchester United man Wayne Rooney was responsible for many iconic Premier League moments over the years, whether it was phenomenal long-range strikes, superb assists, or indeed rock-hard challenges. But he was also reliable from 12 yards out when called upon.

The striker scored 208 goals from his 491 appearances in the blue of Everton and the red of Man United, with 23 of those being spot kicks. The set-piece specialist also netted seven free kicks during his time in the English top flight.

For various reasons, Leicester have been nowhere near their best this season. The same can be said of their striker Jamie Vardy. The Foxes legend has, however, scored 133 goals throughout his phenomenal Premier League career, with 26 of those coming from the spot.

Opposition goalkeepers are fully aware of just how consistent he is with his penalties, with Leicester supporters always confident in their number nine. Manager Brendan Rodgers would currently do anything for a goal from his forward, regardless of how it comes about.

Manchester City star Sergio Aguero broke many records and topped many lists thanks to his stunning career in the Premier League. This includes being the leading foreign goalscorer in the competition with 184 goals, while his 12 hat-tricks are more than anyone else.

But one list he couldn’t quite top is that of most penalties scored, with the Argentine sitting sixth in the all-time leaderboard with 27. His total from the spot is minuscule compared to his overall tally, proving just how lethal he was from open play.

Mr Reliable Mark Noble will be remembered fondly for various reasons by West Ham fans, with his loyalty to the Hammers second to none. The midfielder didn’t score many goals, but when it came to scoring penalties, supporters were 99% confident that the ball would end up in the back of the net.

In fact, 28 of Noble’s 47 Premier League goals arrived in that fashion. The childhood West Ham fan retired earlier this year having lived the dream for his local club, hanging up his boots with 550 Hammers appearances to his name.

Liverpool hero Steven Gerrard was a class act all over the pitch, whether it be crunching tackles, expert passes or crucial goals. He was, of course, known for his long-range efforts, but Liverpool fans know all too well just how reliable he was from 12 yards out.

A total of 29 of his 120 Premier League goals were scored from the spot, with many of those often winning games for the Reds, who were constantly rescued by their inspiring leader for many years.

Tottenham Hotspur and England striker Harry Kane has proven himself as a leader for both club and country. For Spurs, he’s netted 30 goals from the spot, but that number looks set to soar and soar in the months and years to come. His latest spot kick came in the recent 2-0 victory over Everton, which saw him overtake Gerrard on the all-time Premier League penalty list.

With his clever runs in behind, coupled with his cunning as a striker, Kane has been responsible for winning plenty of the penalties he has scored. From that initial moment of being fouled, it’s then about calming the nerves and focusing on the job at hand, and there are not many better in world football than Kane at doing just that. 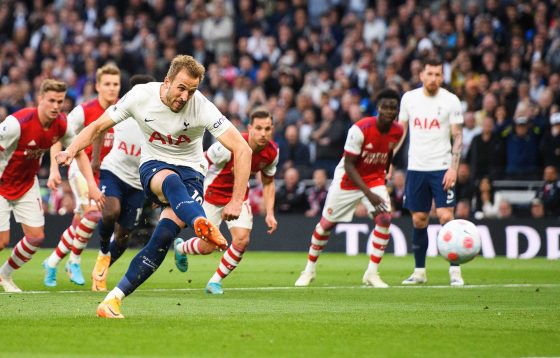 Chelsea legend Frank Lampard will forever remain one of the greatest players not just in the club’s history, but in Premier League history. He scored 177 goals from his 609 appearances in the competition, with 32 of those coming from the spot.

The Blues have had many talented penalty takers over the years, but their captain fantastic was always reliable from 12 yards out. His free kicks were, of course, also something to behold, but whenever Chelsea required a steady head, Lampard rarely disappointed.

As recorded by the Premier League, Newcastle and Blackburn hero Alan Shearer leads the way for penalties scored in the competition with 56. His total is perhaps unsurprising given the fact he leads the all-time Premier League goals chart with 260.

But as the phrase goes, every goal counts, and moreover, someone still has to put away the penalty at the end of the day. More often than not, Shearer did that during his time in the Premier League, from 1992 to 2006.

Incidentally, the striker – along with Man United legend Rooney – is responsible for the most penalties missed in the Premier League. Both forwards missed 11 penalties during their playing careers in the competition.

89 – Penalties scored by Chelsea, the most by any club

91 – Penalties conceded by Arsenal, more than any other club

73 – Penalty goals conceded by Arsenal, more than any other club

5 – Penalties conceded by Arsenal defender David Luiz in 2019/20, the most by any player in a single season

11 – Penalties conceded by former Stoke City defender Ryan Shawcross, the most by a single player in the Premier League

13 – Penalties saved by David James (Liverpool, Man City and Portsmouth), the most by any goalkeeper

21 – Penalties saved by West Ham, more than any other club