South Korea arrive in Zabeel Stadium as they continue their pursuit of top billing in Group A. They have a disarrayed Syrian awaiting them following their 2-0 dismantling at the hands of the United Arab Emirates.

Ever since Syria moved out of the second stage of AFC qualifiers behind them, they have struggled. The increased responsibility of expectations has not helped their cause as they have gone winless in seven qualifiers. Their next rivals have been on the opposite end of the spectrum. The Taegeuk Warriors are unbeaten in 13 international outings, winning five in succession. They should continue this streak at the Saida Municipal Stadium, adding to Valeriu Tița's problems in the Syrian dugout.

The Qasioun Eagles have struggled to hold their rivals and possess the worst defensive record in Group A. They have conceded 13 goals, whilst only sending five in the opposite direction. Syria has a tough task on their hands as South Korea arrive after conceding a paltry two goals and claiming 9 goals for themselves. Syria has been shut out thrice in their third stage qualifiers, while South Korea has kept five clean sheets. With three of their last four duels seeing this come to fruition, we believe both sides will not get on the scoreboard in this meeting.

Syria vs South Korea: Check out the best odds and the latest stats

Syria vs South Korea: Check out the team lineups

Valeriu Tița became the darling of Syria as he earned top-billing in Group A of AFC World Cup qualifiers second stage. Lady luck has not smiled on the Qasioun Eagles in stage three. They have gone from claiming seven victories from eight group fixtures to none in seven. Entering the final three rounds, they have no chance of qualifying with Iran and South Korea separating themselves from the herd.

Lebanon tried to hold South Korea but eventually let up. The Taegeuk Warriors first-half extra-time strike at the Saida Municipal Stadium was enough for them to continue their 13-match unbeaten run. With Iran also barely breaking a sweat against Iraq, they need a win against the hapless Syrians in pursuit of Group A pole position.

Questions About Syria vs South Korea 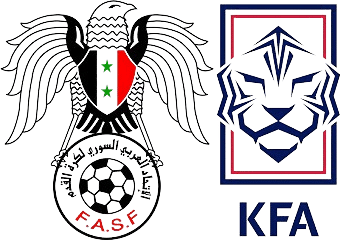 Where is the game being televised? DAZN Japan and Diema Sport.