Switzerland caused the shock of the tournament by knocking the World Champions and Euro 2020 favourites France out in the last round and now face another tough tie against Spain. The Spanish have found their scoring boots and head into this quarter-final tie as the bookmaker's favourites to progress, but still have issues in their defence to be concerned about.

Read on for our full match preview and prediction for Switzerland vs Spain in the European Championship.

Both teams have scored in four of the last seven meetings between Switzerland and Spain, including their last encounter in 2020 which ended in a 1-1 draw. Both teams have also scored in four of Switzerland's last six international matches, including three of their four games at Euro 2020. Two of Spain's last three outings have also ended with both teams getting on the scoreboard and their game against Croatia in the last round finishing in a 5-2 victory AET.

Despite the last few encounters between these two countries proving to be low-scoring affairs, we're expecting a goal-fest in their Euro 2020 quarter-final. Over 2.5 goals have been scored in five of Switzerland's last six matches, including a 7-0 win over Liechtenstein and a 3-3 draw with France. Three of Spain's last five fixtures have also seen at least three goals scored, with Luis Enrique's men netting five goals in each of their last two matches.

We're going against the odds with this prediction but after their display against France, We're backing Switzerland to progress through to the semi-finals. Now, backing a ‘to qualify' bet means that even if Switzerland win in 90-minutes, extra time, or penalties, then our bet will payout. Obviously, Spain are the big favourites to win this game, especially after scoring five goals in each of their last two matches but Switzerland stood toe-to-toe with the World Champions and came out on top.

Everything you need to know for Switzerland vs Spain

Spain are already the big favourites to win this quarter-final tie and the head-to-head record between the two nations only strengthens that belief. Spain have won 4, drawn 3 and lost 1 of their 8 previous encounters with Switzerland but the last meeting between the two countries in November of last year did end in a 1-1 draw. There haven't been a lot of goals in recent games between the pair but we're expecting an action-packed 90-minutes going off the recent performances of both countries. Switzerland's last three games have produced over 2.5 goals with the game against France ending in a 3-3 draw. Spain's last two matches have seen five or more goals scored and their match against Croatia was the highest in the tournament so far, producing 8-goals and being decided in extra-time.

Can Switzerland pull off another giant-killing?

Switzerland caused the biggest shock of Euro 2020 when they knocked the pre-tournament favourites France out in the last round. Switzerland thoroughly deserved their victory as they outperformed the World Champions and showed great character to come from 3-1 down to secure the draw which took them into extra time and eventually, penalties. Despite pulling off this fantastic result, the Swiss head into their quarter-final against Spain as the clear underdogs once again, something that may well play in their favour.

Spain scraped through the group stage but followed up their 5-0 demolition of Slovakia with a thrilling 5-3 extra-time victory over Croatia and now they are scoring goals, Luis Enrique's men are being taken seriously. There are still some concerns surrounding the Spanish defence and their conversion rate but while they continue to create chances they will always be a threat. Spain will be expecting a frantic end-to-end 90-minutes, and possibly more, against Switzerland and we don't see either side changing their open, attacking styles when it has so far proved fruitful.

Switzerland will be expected to start the game against Spain in the same 3-5-2 formation that they fielded with success against France. However, Arsenal midfielder Granit Xhaka will be missing through suspension.

Spain have no fresh injury concerns following their epic 5-3 extra-time win over Croatia, so this is how we expect the favourites to lineup.

Well, it's matchday and Switzerland are lining up exactly how we expected. The only change comes for Spain, who have Villarreal defender Pau Torres at centre back instead of Eric Garcia. Let's see how that affects today's matchup. 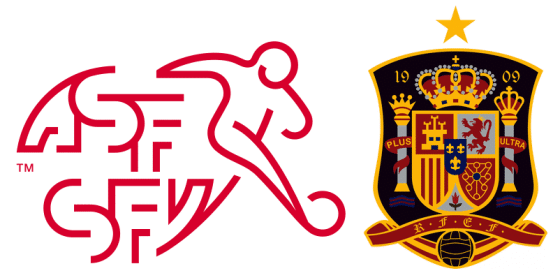