Swansea vs Coventry: Check out our betting tips

Coventry aren't completely out of the playoff race just yet. Can they get a win here to keep them firmly in the mix? Find out with our Swansea vs Coventry match preview with free tips, predictions and odds mentioned along the way.

We can't separate the teams

We begin our predictions for this match by tipping a draw. If we were going purely on form we would probably lean, ever so slightly, towards Coventry, however, Swansea have a good head to head record against the Sky Blues with Swansea having won four of the last five meetings between the sides – albeit a few of them were a decade or so ago. On the form front, Swansea have taken nine points from the last 15 available whilst Coventry have taken 10 across the same period of time. There is very little between these sides right now.

Our second tip for this game backs Swansea's young striker Joel Piroe, 22, to score at anytime. Piroe is having a good season up top for the Welsh side having weighed in with four assists and 13 goals. He's bagged two goals in his last three games and netted in the reverse fixture of this earlier in the season as well, which will mean confidence will be high for him here. Coventry have conceded in four of their last five games too so they are far from watertight.

Here are the key stats & form guide for Swansea vs Coventry

In recent weeks both of these teams have looked half decent having taken a reasonable points haul. It means both will arrive here confident and, hopefully, ready to put on a show for the fans.

Swansea have started to find a little bit of their groove in recent weeks and their victory over West Brom raised a few eyebrows. Following that up with another win here won't change much in terms of the league table for them but mentally, ahead of next year, it could help reinforce a positive mindset and direction of travel. The likes of Flynn Downes and Joel Piroe will be crucial.

The Sky Blues were soaring high earlier in the season and although they are now an outside shot for promotion the top six race is far from over with just three points separating them from Luton. One thing they could do with is Viktor Gyokeres getting back on the goal trail. 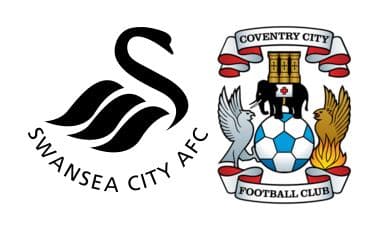