Swansea blew a two goal lead in the week in unbelievable fashion. How will they respond to that setback? Find out with our Swansea City vs Luton Town match preview with free tips, predictions and odds mentioned along the way.

Luton Town have been going through a rough patch lately; they are coming off three consecutive losses, and have no wins in their last six matches in all competitions. It's even more concerning because Nathan Jones's men failed to score in their last two games. On the other hand, Swansea City have done relatively better than Luton Town this season; they've lost once in four league games, with a win and two draws. This will likely be a tight contest, but considering Swansea have the advantage of playing at home, we are confident that they'll emerge triumphant in this clash.

We've mentioned that Luton Town did not score in their last two games; they've actually registered just one goal in four league games so far, and are tied for the least number of goals scored in the Championship. Because of their lack of goals, most of Luton's games have been on the low-scoring side; in fact, six of their last seven games saw less than three goals scored. We should also point out that five of the last six meetings between Swansea and Luton went below the 2.5 goal mark, with four of those encounters going under 1.5. All things considered, this will likely be a low-scoring affair.

Will winless Luton find a way to win?

Good form is not a term that either of these teams are going to be talking about right now whilst the head to head record between the pair are somewhat mixed as well. With all that in mind, this match could well be an intriguing affair. Let's see how we expect the sides to shape up.

Swansea are coming off a heart breaking 2:2 draw against Millwall; they had a two-goal lead at the 90 minute mark, but due to some sloppy defending, they conceded two stoppage time own goals. Swansea will play back-to-back home games for the first time this season as Luton Town come visiting; they'll hope to put their disappointing midweek result behind them with a win.

Luton Town experienced all sorts of problems at the back of a 2:0 loss against Bristol City; they've now lost their last three games, with no wins in five matches so far this season. Because of those disappointing results, Luton Town are second-last on the Championship table, with just two points from four league games; will they be able to snap their losing streak here?

A quickfire FAQ on Swansea City vs Luton Town 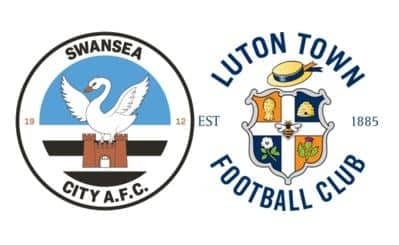