Bayern Munich to Win & Over 3.5 Goals

Stuttgart travels to Allianz Arena where the relaxed title winners Bayern Munich await their arrival. It should be an easy affair for the Bavarians who have nothing to play for, while the Swabians struggle in the relegation playoff slots and are four points away from safety.

Bayern Munich to Win & Over 3.5 Goals

Stuttgart are on the rollercoaster ride of draws and defeats and lost three of the last six games. On the other hand, Bayern Munich has won four of the previous five league attempts. The Bavarians hold a beautiful streak of eight unbeaten- games in their home stadium. Adding more, Bayern Munich also won all of the recent five H2Hs against the Swabians. So a victory for the FCB seems visible at the end of this game. They should manage it in style given their recent form. The Bavarians earned a 0-5 victory in the reverse leg and another high scoring affair is expected at the Allianz Arena.

Bayern Munich has been on the scoring side in all of the recent Bundesliga outings. However, Stuttgart struggled in their offensive approach and failed to score in three of the last four attempts. The Reds were also unable to score in the last two H2Hs and will be in trouble again as the FCB have two clean sheets in the last four league games. So expect only Bayern to get on the scoreboard after the final whistle blows.

Bayern Munich vs Stuttgart: Check out the best odds and the latest stats

Bayern Munich vs Stuttgart: Check out the team lineups

After confirming their championship in the Bundesliga, the FCB lost the very first game after that against Mainz Previously. But Bayern has a quite easy challenge to get back to their winning track in the coming game. Bouna Sarr will be unable to make an appearance in this game due to injury issues.

The equaliser in the last minutes of the game avoided the Reds to go pointless in the last game. However, Stuttgart has only managed six wins in the 32 rounds and are battling in the relegation area with only 29 points. The club boss Pellefrinoi Matarazzo will report six players on the injury list ahead of this game.

Questions About Bayern Munich vs Stuttgart 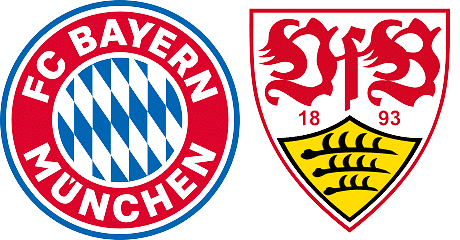