Middlesbrough are right in the thick of the playoff chase after their Wednesday night win. Can they push on again with another win here? Find out with our Middlesbrough vs Stoke match preview with free tips, predictions and odds mentioned along the way.

Middlesbrough ended a poor run of form with their midweek win over Cardiff and we think they'll follow that up against Stoke. Don't get us wrong, that's unlikely to be easy with the Potters having won each of their last two away games but there are a few key things to note. Firstly, Boro have something to play for whilst Stoke don't. Secondly, the game is at the Riverside meaning the home crowd will be on side and, finally, the head to head record doesn't make good reading for Stoke. In their last five visits to the Riverside they've managed to escape without defeat just once – that was a 1-1 draw back in 2016!

Stoke will join the party with a goal

We might be backing Middlesbrough to win but, as we've touched on, their form hasn't been amazing with four of their five prior home games ending in defeat whilst Stoke have won three of their last four games in all. With that considered, it wouldn't be a huge shock to see both teams register on the scoresheet. Three of the last five meetings between the two teams at the Riverside stadium have ended that way as well so this game does have a history of goals at both ends.

Here are the key stats & form guide for Middlesbrough vs Stoke

Middlesbrough vs Stoke: Let's look at the predicted lineups

Stoke's campaign has long been over but Middlesbrough are taking their season down to the wire. Their form fell off a cliff but still they remain in the hunt. Will they manage to stumble over the line?

There was a time when Middlesbrough finishing in the top six just looked like a banker given how they were playing. That form ground to a halt though and now they're in desperate need of a couple of wins. Anything but perfection will likely see them fall short.

Stoke's season is over but they do still need to bag a win or two to ensure they don't slip into the bottom half of the table; that would make rather horrid reading for a club of their stature. On top of that, a positive couple of games before the season end always helps the summer that little bit more enjoyable!

A quickfire FAQ on Middlesbrough vs Stoke 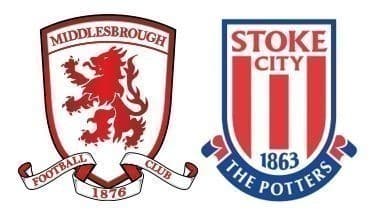