Derby have recorded back to back victories ahead of this game but will they make it three on the spin as they visit Stoke? Find out with our Stoke vs Derby match preview with free tips, predictions and odds mentioned along the way.

Another point for battling Rams

We've already touched on the fact that Derby have won their last couple of games but we don't see that run continuing here. In a large part, that's down to their away from; the Rams haven't won away from home since August. The other part of our logic is driven by Stoke; they've lost two of their last five at home but also drawn two games. Their general form, however, has them unbeaten in two and we see them sharing the spoils here. Two of the last five head to heads have ended level too with another two only having the odd goal in them.

Our next tip for this game is that we'll see fewer than 2.5 goals. For our money, it's a bit of a banker too. Stoke have fallen short of the 2.5 mark in each of their last seven games whilst Derby have seen five of their past seven come up south of the 2.5 threshold; those five games include their last three with their average goals per game across the seven matches sitting at just 1.9 goals. For Stoke, their average is a measly 1.1.

All the stats & odds for Stoke vs Derby

Stoke vs Derby: Check out the team lineups

Derby might be doomed to relegation owing to their points deduction but they are showing some real quality and personality to date with Wayne Rooney getting plenty of plaudits. Stoke meanwhile sit just outside of the top six with a couple of games in hand.

Stoke are right in the mix for a playoff spot right now and that means they'll have games like this earmarked as ones where they should be taking three points. It's rarely that easy in reality though so they'll need to come up with a way to breakthrough what is a stubborn Derby side.

Derby have just beaten high flying West Brom taking their tally over the past five games to  seven points; their latest two games have accounted for six of them. It doesn't get any easier for the Rams though with a visit to the Bet365 stadium. If they can take another three points then some might actually start to believe that the greatest escape of all time is possible.

The final word on Stoke vs Derby 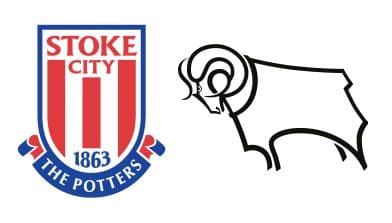