Spain and Portugal lock horns at the Estadio Wanda Metropolitano in their first warm-up game ahead of the European Championship. When these two countries clash there is often very little between them and we're expecting more of the same on Friday.

Read on for our full match preview and prediction for Spain vs Portugal.

Each of Spain's last three draws have ended 1-1 and two of the last three draws played out between these two nations have also featured under 2.5 goals. Both teams have scored in three of Portugal's last four outings, which is why we're favouring a 1-1 draw ahead of a goalless draw this Friday.

All the stats ahead of Spain vs Portugal

Spain secured a 3-1 win in their last game at home to Kosovo but will be expecting a much tougher 90-minutes against Portugal. The big names missing from this Spanish squad include Ramos, Navas, Carvajal, and Asensio. The hosts look a little light up-front but will be hoping that Morata finds his form ahead of the Euros. Busquets will command the midfield and will secure his 123rd cap if he plays against Portugal on Friday. Alba is the most experienced defender in the squad with 72-caps and de Gea looks set to continue in goal and could add to his 45 caps on Friday.

Portugal ran out 3-1 winners at Luxembourg last time out and will be looking to build up some momentum with a positive result on Friday. Gomes and Soares both missed out on selection for the Euros but there are plenty of familiar faces in the Portugal side. Ronaldo captains the team at the age of 36 and has already scored over 100-goals for his country. Another centurion, Moutinho, is the vice-captain but could struggle to get into a midfield lineup that includes Silva, Fernandes, Pereira, Carvalho, Sanches and Neves. Pepe, 38, has 113 caps and looks set to start at the back in the Euros, alongside Dias or Fonte, while Guerreiro and Cancelo are the likely full-backs. Rui Patricio will earn his 93rd cap if he starts in goal on Friday. 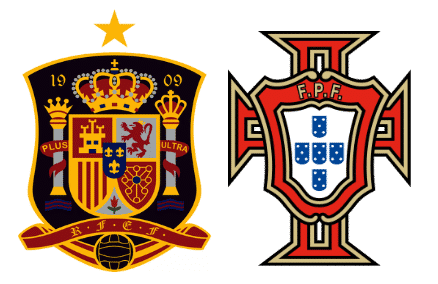