Southampton have already taken 4pts from their two league games against West Ham this season and now the Saints are aiming to knock the Hammers out of the FA Cup. David Moyes' men might be battling for the Champions League places this season but winning a cup would mean everything to the West Ham faithful and the FA Cup is the only silverware left on the table for the Londoners.

We're expecting this game to be tight and tense throughout as both teams will feel that they can go all the way and win this competition and bring an end to their long trophy droughts. Each of the last three meetings between these two clubs at St Mary's have produced under 2.5 goals, while four of Southampton's and four of West Ham's last six outings in all competitions have also ended with fewer than three goals scored.

We're certainly not expecting goals to go in at both ends of the pitch on Wednesday night as that has only been the case in two of the last seven head-to-heads between Southampton and West Ham. Each of Southampton's last two matches have have produced wins and clean sheets for the Saints, and both games were played at St Mary's. Three of West Ham's last six outings have only seen one side score, which includes their 1-0 defeat at Man Utd.

Southampton vs West Ham: The Stats and Figures

West Ham's trophy hopes on the line at St Mary's

Southampton made the most of their home advantage against struggling Norwich on Friday night, running out comfortable 2-0 winners in the end. Che Adama put the home side in front in the 36th-minute and the Saints lead 1-0 at the interval. While the hosts always looked like they needed another goal to get into their comfort zone, it didn't arrive until 2-minutes from time through the unlikely source of Romeu.

West Ham would have been expecting a close and competitive 90-minutes at home to Wolves on Sunday, and that's just what they got. The two sides went in at the break goalless but West Ham took the lead just before the hour mark through Czech midfielder Soucek and it turned out to be the only goal of the game. The Hammers sit 5th in the table 10pts clear of Southampton but we still expect a very close game on Wednesday night. 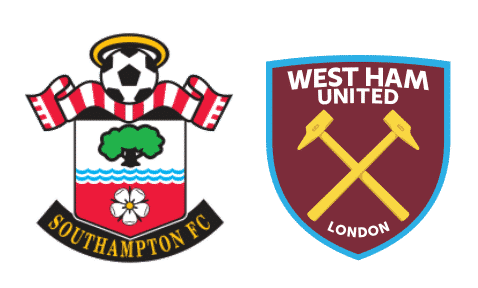