Burnley take to the field for a must-win game against Southampton in the Premier League this Thursday without Sean Dyche at the helm for the first time at Turf Moor in almost 10-years. Southampton provide the opposition on Thursday and should be full of confidence following a win against Arsenal last time out.

There is a good chance that we will be treated to goals at both ends of the pitch on Thursday as four of the last six league meetings between Burnley and Southampton have ended the very same way. Two of the host's last three outings in the Premier League have seen both teams score, while four of the Saint's last six fixtures have ended with both teams getting on the scoreboard.

At least three goals have been scored in four of the last five encounters between these two clubs in the Premier League, and we're expecting more of the same on Thursday. Two of Burnley's last three home games have witnessed at least 4-goals scored while four of the Saint's last six outings have produced over 2.5 goals, adding further weight to our prediction.

All the stats and odds for Burnley vs Southampton

Burnley's trip to West Ham at the weekend Micheal Jackson take charge of his first game as temporary manager. The visitors took the lead at the London Stadium via Weghorst and should have doubled their advantage before the break but Cornet failed to convert a first-half stoppage-time spot-kick for Burnley. That missed penalty proved costly as West Ham equalised in the second half and the game ended in a 1-1 draw, meaning Burnley missed out on what would have been a huge victory in their bid to escape relegation.

Southampton played host to Champions League-chasing Arsenal on Saturday where a solitary effort from Bednarek in the 44th-minute proved enough for the Saints to claim a 1-0 victory. That result took Southampton onto 39pts for the season, ending any faint chances of the Saints being dragged into a relegation battle.

Burnley: Pieters, Mee, Gudmundsson and Westwood are the main injury concerns for the hosts.

Southampton: Alex McCarthy is still a doubt due to a thigh injury but the Saints have no fresh injury concerns or suspended players.

FAQ about Burnley vs Southampton 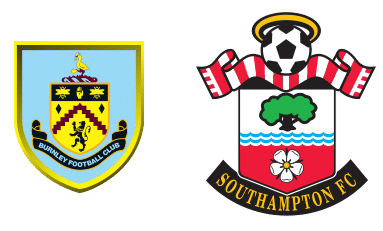