Brentford vs Southampton: Our betting tips

Brentford and Southampton are both poised on 40pts in the Premier League table with just three games left for each club to play this season. Brentford have the home advantage and have form in their favour this weekend but the Saints did thrash the Bees 4-1 in January's reverse league fixture.

Brentford's top scorer has enjoyed his first full season in the Premier League scoring 12-goals so far and we're backing the former Peterborough United frontman to find the back of the net once again on Saturday. The Bee's forward has scored 7-goals in his last ten appearances in all competitions but is due a goal having failed to score in his last three matches.

Check out the key stats & form for Brentford vs Southampton

Only goal difference separates the two clubs ahead of kick-off

Brentford made the trip to Old Trafford on Monday night which saw the Bee's unbeaten run come to an abrupt end. Fernandes put Man Utd in front after just 9-minutes and just after the hour mark, Ronaldo converted a penalty to make it 2-0. Varane scored a third and final goal for the hosts to wrap up a comfortable 3-0 victory leaving Brentford sitting 14th in the table, 3pts off 10th placed Newcastle.

Southampton had the home advantage against Crystal Palace on Saturday, not that they made it count. Romeu put the home side in front, a rare goal from the Spaniard, but goals from Eze and Zaha in the second half saw the Eagles fly away with the points. Southampton are in danger of ending the season on a sour note and really need to get back to winning ways this weekend if they want to push for a top-half finish.

Brentford: Pinnock, Canos, Onyeka, Jorgensen and Ghoddas are all doubts for the game through injury.

Southampton: Valentino Livramento is the main injury concern for the visitors this weekend.

A brief FAQ ahead of Brentford vs Southampton 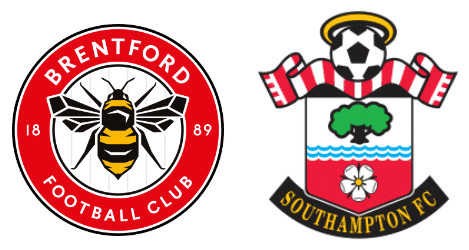