Another very interesting matchup in this round of La Liga is the Sevilla vs Real Sociedad duel. If you want to know more about this match, read our preview and check our free betting tips.

If you are looking for the best La Liga betting tips, including our top predictions for Sevilla vs Real Sociedad, you've come to the right place:

Although Sevilla comes into this game after getting eliminated from Europa League by West Ham, they are still second in La Liga and in title race with Real Madrid.

And since they are ten points behind them, they can't afford to lose any more points if they want to stay in the race. However, Real Sociedad has four wins in the last five games, but Sevilla is simply too good at home this season. Plus, Sevilla beat Real Sociedad in three of their last five h2h duels.

Sevilla and Real Sociedad to Draw at Half Time

Even though we can see Sevilla getting the three points in this game, we certainly don't expect them to have an easy job. In fact, we expect a very close duel that will be decided in the second half.

After all, four of the last five h2h meetings between Sevilla and Real Sociedad have been tied at half times and we expect the same to happen on Sunday.

The best odds and top stats for Sevilla vs Real Sociedad

If you are searching for the highest Sevilla vs Real Sociedad odds, take a look at our choice of odds from various UK bookmakers:

When two teams from the top of the standings meet, it's bound to be interesting. So, let's take a closer look at both teams ahead of this game:

The last few weeks haven't been that great for Sevilla since the team has two wins and four draws in the last six games in La Liga and they've fallen further behind Real Madrid in the title race. The difference is now ten points and it seems highly unlikely that Sevilla can catch up. In addition to this, the team was eliminated from Europa League on Thursday after losing to West Ham in London.

That being said, these results are not a huge surprise since Sevilla has a lot of injured players right now, including Erik Lamela, Papu Gomez, Suso, Marcos Acuna, Karim Rekik and Diego Carlos.

The team from San Sebastian has four wins and two losses in the last six games and they are keeping up with the rest of the teams from the top since they are currently sixth in the standings, four points behind Atletico Madrid in the fourth place that leads to Champions League next season.

However, Real Sociedad also has problems with injuries, which was the case for most of the season. Ander Barrenetxea is out of this game, along with Nacho Monreal and Carlos Fernandez, while David Silva is questionable.

FAQ for Sevilla vs Real Sociedad 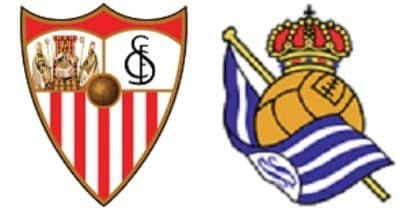