Ross County take on Aberdeen at Fir Park in the Premiership on Saturday, September 3rd. Struggling County host a Dons side hitting form this weekend. Read our free predictions and find the latest odds for the fixture below in our detailed match preview.

Aberdeen have won four of their last five games in all competitions ahead of their tussle with Ross County on Saturday. Read our top predictions for this weekend’s fixture below.

Aberdeen have hit a purple patch of late, recording victories in four of their last five assignments in league and cup, and the in-form Dons look strong enough to maintain their flow against an out-of-sorts Ross County side on Saturday. The hosts have lost five of their last six matches in all competitions and their confidence has eroded considerably as a result. Aberdeen look in far better shape here and bettors should consider backing them in the match result market this weekend.

To their credit, Ross County have managed to maintain a modicum of goal-scoring threat despite their poor run of results, particularly at the Global Energy Stadium. Indeed, County have a 100% strike rate after five competitive home fixtures this season and that impressive return suggests they could notch a consolation effort on Saturday. Aberdeen have also found the net in five straight games, so back both teams to register this weekend.

Top Betting Odds and Stats for Ross County vs Aberdeen

View our rundown of the best stats for Saturday’s fixture below alongside a tool to help you choose the top odds.

Read all of the latest injury updates and team news for Saturday’s Premiership showdown between Ross County and Aberdeen below.

Ross County have close to a fully fit squad ahead of the weekend's action, with defender Connor Randall, who is out until December, listed as their only current absentee. Ross County are just one place off bottom in the Premiership standings after a poor start to the campaign.

Aberdeen are set to be without a couple of midfielders on Saturday with Callum Roberts and Connor Barron both carrying injuries. The Dons have their eyes on third spot following a good run of three wins in four Premiership fixtures. 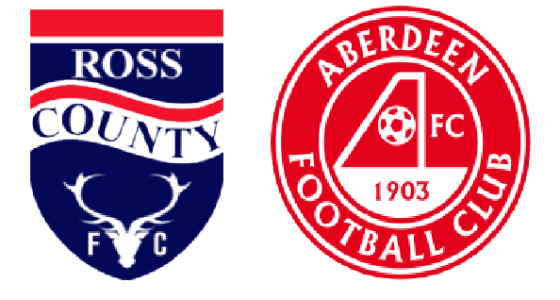 Viewers in the UK cannot watch Ross County vs Aberdeen live on TV.

We recommend checking out the odds at Stake for Saturday’s fixture.