RKC Waalwijk remain hopeful of a second consecutive victory at home when they welcome struggling Cambuur to the Mandemakers Stadion this weekend.

RKC Waalwijk to get the three points

RKC Waalwijk have lost only once at home this season and even this was a very narrow loss to Feyenoord. In fact, the team has suffered only two defeats in the last five matches and both of these defeats have been against teams occupying the top three places in the league table. Meanwhile, Cambuur have just suffered a loss against Groningen as the team slipped to 13th place in the table.

Cambuur have had a nightmare run in front of goal with the team only registering phone calls from the first six matches of the season. Meanwhile, RKC Waalwijk have done fairly well with 10 goals in the first six games but five of those came on the win over Excelsior. Cambuur are likely to further suffer losses in this game.

RKC Waalwijk vs Cambuur: Battle in the Dutch Eredivisie

RKC Waalwijk have done relatively well so far this season with the team suffering defeats against the top opposition. On most of the other matches, the team has done well to pick up points on a regular basis. Manager Oosting could make a couple of changes to the squad and starting lineup in order to refresh the team after the recent loss to PSV.

Cambuur have frequently been able to get the better results against RKC Waalwijk with the team going without a defeat in the last eight matches against this opponent. However, recent form is not in favour of the visitors with three defeats on the bounce. Henk de Jong may be interested in making several changes to the starting line-up in order to try and recover from this run.

RKC Waalwijk: RKC manager Joseph Oosting does not have any injury problems apart from Mika Biereth. The game could feature Yassin Oukili and Zakaria Bakkali from the start.

Cambuur: Robin Maulun and Léon Bergsma are missing from action because of injuries. Manager Henk de Jong may also be without Maxim Gullit, who is doubtful for the game.

Top Dutch Eredivisie Stats ahead of RKC Waalwijk vs Cambuur

Questions about RKC Waalwijk vs Cambuur 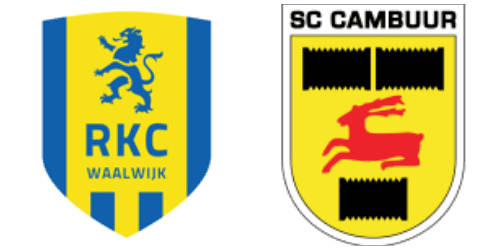 Where is the match scheduled? Mandemakers Stadion

Which team is the favourite to win? RKC Waalwijk