RKC Waalwijk has been the biggest surprise this season in Eredivisie, but against Ajax, they will try to stop one of the most incredible streaks in Dutch football.

These teams are one of the best when it comes to playing in games with more than three goals. Both teams did it six times in their ten matches, and the last time they played while RKC was the host, Ajax won 5-0. Waalwijk went over this mark three times in their last four matches, Ajax covered it in three straight games.

Even though Ajax has by far the superior record among these teams, this season's RKC is a bit different. They are efficient and have one of the best forward lines in Eredivisie. Their goal difference at 20-14 is more than they could have hoped for before the season, and up to this point.

Everything you need to know about RKC Waalwijk vs Ajax

The most incredible streak in Dutch football

It's been an incredible 28 matches in a row that RKC Waalwijk hadn't beaten Ajax. But, if we talk about this season, RKC is playing well and is the biggest surprise in Eredivisie. They are holding onto the seventh spot in the rankings with three wins, five draws, and only two losses. They are undefeated in their last four games, and a match against Ajax is coming at the right time for the club when they are firing on all cylinders. There are only three teams in the league this season that has scored more goals, those teams are PSV, Ajax, and Feyenoord. RKC is finding itself in some high-class company that nobody could foresee coming into the season.

Ajax is the defending champion, but the team isn't as good as it was with their former manager Erik ten Hag who joined Manchester United this past summer. Alfred Schreuder took the helm and he is keeping them near the top of the rankings, but his team suffered some bad results recently, especially the one against Napoli 6-1 in the Champions League, and in front of their fans. Dusan Tadic didn't score many goals this season, but the Ajax captain leads the team in assists with seven. Steven Bergwijn already showed that he is a big signing for Ajax coming from Tottenham this summer, he scored seven goals this term. Another signing from Leipzig, Brian Brobbey has accounted for six goals.

RKC Waalwijk: No injuries to report.

Ajax: Devyne Rensch and Ahmetcan Kaplan are unavailable through injury. 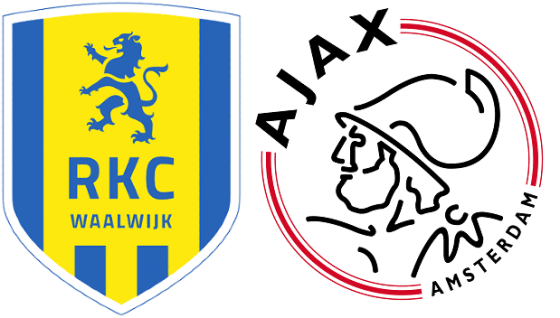