Sporting could take one step closer to ending their Primeira Liga drought if they can secure a win away at relegation battling Rio Ave on Wednesday night. The hosts sit just 2pts above the relegation places heading into a tough home game against table-topping Sporting but did manage to secure a draw against them earlier in the season.

Sporting top the Primeira Liga table by 6pts heading into the last four games of the season and will be determined to claim another victory on Wednesday. The visitors have won 27 of their last 45 games against Rio Ave in all competitions and remain unbeaten in their last six fixtures, picking up three wins and three draws. Rio Ave haven't won any of their last six matches and could slip into the bottom three this week.

The last two meetings between Rio Ave and Sporting have produced under 2.5 goals. The recent performances of both clubs also point towards a low-scoring game on Wednesday, with five of Rio Ave's and five of Sporting's last six outings in the Primeira Liga seeing fewer than three goals scored.

Sporting have kept clean sheets in three of their last four outings in the Primeira Liga, while Rio Ave have failed to score in four of their last six matches. Sporting are yet to taste defeat in the league this season and have kept clean sheets in 67% of their away games, so you can see why we're backin the visitors to stop Rio Ave from finding the back of the net on Wednesday.

Rio Ave haven't won any of their last six matches and really need to get a win under their belt as the threat of relegation looms large. As things stand, Rio Ave are 2pts above the bottom three with four games left to play this season. However, two of their last four games are against the current top two sides, Sporting and Porto, so Rio Ave really need to get back to winning ways as soon as possible.

Sporting are in the midst of an unbeaten run and if they can keep it going for another couple of games then they will have finally ended their long wait for another Primeira Liga title. Simply proving that there are more than two title contenders in Portugal has been tough for Sporting over recent years but this season they have stepped up. The visitors are yet to suffer a single defeat in the league and only have local rivals Benfica left of the ‘big boys', so it looks like they might well go all the way and win the title unbeaten.

Rio Ave vs Sporting: Your Questions 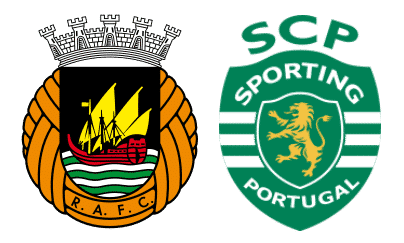