Nantes hosts Rennes after bagging the Coupe de France trophy in the finals played against Nice a few days ago. The hosts are in high spirits ahead of this fixture and hope they can finish the season even higher up the table. We have the best predictions for this Ligue 1 game as well as the latest team news, stats and useful fixture information in this preview.

Nantes held onto to a 47th minute lead in the Coupe de France to bag the important silverware. But after ending the ambitions of Nice in a game that attracted thousands of fans at Stade de France, Nantes now have an even tougher assignment with few games to the end of the season. Our best predictions for Nantes vs Rennes are:

Rennes is the team to beat in this duel and we think the visitors will emerge victorious. After bagging the Coupe de France trophy, Nantes will likely approach this game with less vigor. After all, the hosts have little to play for and are safe in Ligue 1 for next season. Rennes never lost to Nantes in the last four meetings, winning three and drawing once. Importantly, Nantes has defeated Rennes only twice in the last 20 meetings while Rennes won 10 of those games. Eight games within that time ended square.

We are also tipping goals on both ends. Nantes has had a great scoring run, finding the net in the last 7 games. The hosts lost only once within that time. The visitors equally found the net in all their last 7 games and lost two games within that time. And while Nantes bagged only one clean sheet in their last 7 matches, Rennes had two clean sheets in as many games.

Here are the latest team stats, including the best odds and H2H information for Nantes vs Rennes ahead of this fixture.

Nantes won the Coupe de France finals by a narrow margin of 1-nil. We expect the hosts to still harbor the excitement of that victory in this fixture. And with just three games left for both team, this fixture is more important to Rennes than Nantes.

Nantes are currently ranked 9th on Ligue 1 and have 51 points after 35 games. The 51 points for the hosts leave them 9 points shy of top five with three games left. Making top five will be impossible if Nantes lose this game against ambitious Rennes. Notably, Rennes is just three points shy of top three and has two points ahead of fourth-placed Strasbourg. The visitors risk losing the fourth sport and even top three of they lose this game.

Notably, Nantes next games after this one are against Lyon, which is equally difficult and finally St. Etienne at the end of the season. On the other hand, Rennes play their next two games against Marseille and Lille, which an even tougher duels, so a win in this trip will bolster their chances for Champions League places. 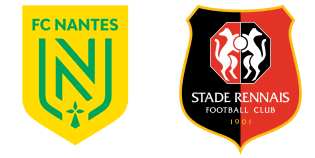 When is Nantes vs Rennes match taking place?

What time will the Ligue 1 game start?

Which side won the reverse game?