The first game and perhaps the most exciting one in the upcoming round of La Liga is the Real Sociedad vs Real Betis duel, so let's take a closer look at it and some of our free betting tips.

The latest betting predictions for Real Sociedad vs Real Betis

If you can't seem to choose the right bet for the Real Sociedad vs Real Betis duel, check our top betting predictions for this game:

Real Betis has been pretty convincing lately against Real Sociedad, winning their last three h2h meetings with a total goal difference of 11:0, so the guests are certainly confident ahead of this game.

Furthermore, both teams are in similar forms in the league and they are only separated by two points, holding the fifth and sixth spots in the standings. Mostly because they are hosting the game, we expect the Basque team to break this poor streak and finally beat Real Betis.

The last five head-to-head duels between Real Sociedad and Real Betis have all ended with three or more goals being scored and we would be surprised if that did not happen again on Thursday.

The best stats and odds for Real Sociedad vs Real Betis

If you want to bet on the top odds for Real Sociedad vs Real Betis, check our selection of odds from some of the best UK bookies:

These two teams are fighting for a spot in European competitiosn, so this should be a very exciting duel. Here's a closer look at both teams:

After reaching the top of La Liga for a while, Real Sociedad dropped in form and down the standings, but the team is now back in form with four wins in the last six games and they are still in good position since they are sixth in the league, so they have a good chance to fight for a spot in European competitions.

The team from Seville is having a fantastic season so far. At the moment, they are fifth in La Liga and in good form with three wins and a draw in the last four games. Furthermore, they reached the finals of Copa del Rey, so they will have multiple chances to secure a spot in Europa League next season, at the very least.

When it comes to team news, Martin Montoya, Rui Silva, and Victor Camarasa will again miss out through injury, but the rest of the team is ready for this important game. 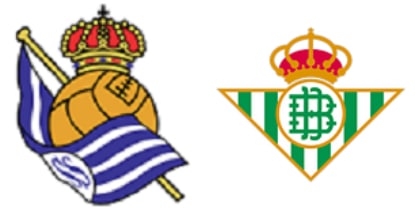