The Real Sociedad vs Osasuna duel in the upcoming round of La Liga could be an exciting one, so let's take a closer look at this game and what we can expect from it.

Our latest Real Sociedad vs Osasuna betting tips and picks

If you need some help to find the best bet for the Real Sociedad vs Osasuna duel, check our predictions for this match right here:

Although Real Sociedad suffered a tough loss to their fierce rivals Athletic Bilbao in the last round, they are still among the teams fighting for a spot in European competitions, while Osasuna is sitting in the middle of the standings.

So, our prediction is for Real Sociedad to win this game despite the fact that they are in similar form as Osasuna – they are the better team and they will play at home.

Four of the last five head-to-head duels between Real Sociedad and Osasuna have gone under 2.5 total goals, so we expect the same to happen in their upcoming match as well.

The best odds and latest stats for Real Sociedad vs Osasuna

If you wish to bet on the highest odds for Real Sociedad vs Osasuna, check our list of odds from a few different betting sites:

News, form, and probable lineups for Real Sociedad vs Osasuna

While the home team is the favourite, the guests have the quality to put up a fight. So, let's check both teams out in more detail:

The team from San Sebastian is still trying to find their rhythm from the first half of the season, but it seems that they are slowly getting back to form. In the last six games, the team has two wins, three draws, and one loss. However, the team enters the upcoming game against Osasuna after being eliminated from Europa League by Leipzig, so they might not be high on their confidence now.

Real Sociedad has a few problems with injured players since Nacho Monreal, Ander Barrenetxea, and Adnan Januzaj are all out of the next game.

With three wins, one draw, and two losses in the last six games in La Liga, it's clear that Osasuna has done well recently and that's why they are currently in the middle of the table, which is in line with their ambitions for the season. If the team can keep up the good form, they might finish the season in the top half of the standings.

Osasuna will be without Aridane Hernandez, Jesus Areso, and Kike Barja once again since they are still trying to recover from their injuries, but the rest of the team is healthy and ready.

The most common questions for Real Sociedad vs Osasuna 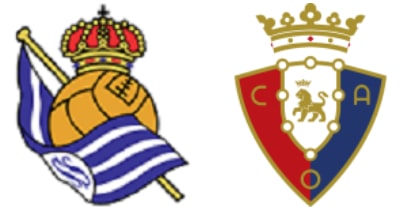