The Real Sociedad vs Elche duel in the upcoming la Liga round could be a very interesting one, so let's take a closer look at the match and what to expect from it.

Free betting tips and predictions for Real Sociedad vs Elche

Along with other La Liga betting tips, you can also check our favourite Real Sociedad vs Elche tips right here:

Real Sociedad to Win at Half Time and Full Time

Despite their enormous problems with injuries, Real Sociedad keeps on winning and playing well. Their next opponent is Elche, a team they beat three times in their last four head-to-head duels. With that in mind, our first prediction for this match is for Real Sociedad to lead at half time and win at the end.

We didn't see both teams scoring in any of the previous four h2h meetings between Real Sociedad and Elche, so we don't see any reason why this game should be any different. Also, both teams have scored in just 33% of Real Sociedad games in La Liga this season, while the same is true for 50% of Elche matches in the league so far.

Mikel Oyarzabal to Score at Any Time

With their top goalscorer Isak out at the moment with an injury, Mikel Oyarzabal has taken the role of the teams main scoring threat. The amazing winger has been in fantastic form for the last couple of seasons and he already started the new season in the same vain, with four goals in the first six matches in La Liga. So, if anyone should score in this game, Oyarzabal is definitely the top pick.

The latest stats and top odds for Real Sociedad vs Elche

If you wish to bet on the best Real Sociedad vs Elche odds, you can check our selection of odds taken from the premier UK bookies:

After a great last season, Real Sociedad started the new season in amazing form and all of that while dealing with a multitude of injuries. The team from San Sebastian is currently 4th in the league with four wins, one draw, and one loss in the first six games. They also draw with PSV in Eindhoven at the start of the Europa League. So, the biggest question remains whether Real Sociedad can keep the form despite having twelve players on their injury list at the moment.

With one win, three draws, and two losses in the first six rounds, Elche sits in the 14th spot at the moment and they seem on a good path to avoid relegation battle. However, things can quickly change and the team needs to keep doing well if they don't want to have another stressful season again. Bigas and Boye are currently injured and will miss the upcoming duel with Real Sociedad.

The most common questions for Real Sociedad vs Elche 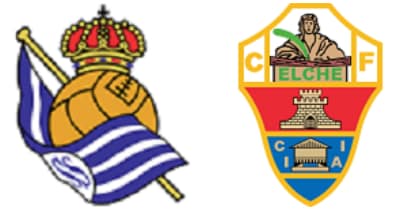