The first game scheduled for Sunday in La Liga is the Rayo Vallecano vs Sevilla duel. With that in mind, we have done an in-depth preview of this game for you, followed by some free betting predictions.

Our latest Rayo Vallecano vs Sevilla betting picks and tips

If you are unsure what is the right bet for Rayo Vallecano vs Sevilla, check our top betting tips for this game:

After four draws in the last six games, Sevilla is now eight points behind Real Madrid in the title race. So, they really need to get a win here against Rayo Vallecano and we can see that happening.

All five most recent head-to-head meetings between Rayo Vallecano and Sevilla have gone over 2.5 total goals and we can see that being the case once again on Sunday.

That being said, Rayo Vallecano averaged 2.31 goals per game in La Liga this season, while Sevilla averaged just 2.11 goals per game, which is the lowest average in the league. Despite this, we can see this game going over 2.5 total goals based on tradition.

The best stats, odds, and more for Rayo Vallecano vs Sevilla

If you wish to place bet on the highest Rayo Vallecano vs Sevilla odds, take a look at our list of odds from the best UK bookies:

We expect to see a very close and interesting match between these two teams, so let's take a closer look at both of them ahead of their duel:

Even though getting to the semi-finals of Copa del Rey is a big success for Rayo Vallecano, the fact they failed to get to the final game is certainly still hurting the team. This disappointment will only add to the fans desperation after six straight losses for the team in La Liga, so Rayo Vallecano has to figure out a way to get out of this poor form as soon as possible or they risk undoing everything good from the first part of the season.

When it comes to team news, Marquelanz is still out with a knee injury, along with Esteban Saveljich who has a hamstring issue. Also, Isi Palazon and Alvaro Garcia will miss this game through suspension.

A draw in the last round against Alaves was not just very surprising, but it also hurt Sevilla since Real Madrid added to their advantage in the title race and now they are eight points ahead of Sevilla. That being said, Sevilla is still in the race, but with eleven games remaining, they don't have the right for other similar slip-ups.

However, Sevilla will have to keep up the pace with Real Madrid without a few injured players, including Erik Lamela, Papu Gomez, Karim Rekik, Fernando, Diego Carlos, Gonzalo Montiel, Suso, and probably also Ivan Rakitic. Furthermore, Joan Jordan will miss the next game through suspension. 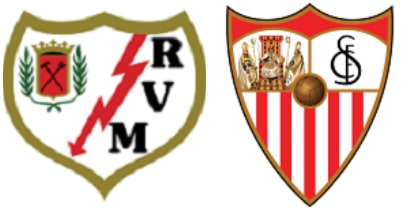