The Rayo Vallecano vs Osasuna duel in the upcoming round of La Liga should be an interesting one, so let's take a closer look at this match and what we can expect to happen.

Our latest Rayo Vallecano vs Osasuna betting tips and predictions

If you are looking for free La Liga betting tips, including the tips for Rayo Vallecano vs Osasuna, you've come to the right place:

While Rayo Vallecano will be in bad mood after their loss in the first leg of Copa del Rey semis, they have been doing great this season and we can see them pushing even harder to get the win against Osasuna.

That being said, Rayo Vallecano did lose four of their last six games in La Liga, but Osasuna is far from great form as well. Ultimately, Rayo Vallecano is playing at home and we can see that being the deciding factor in this game.

Two of the last four h2h meetings between Rayo Vallecano and Osasuna have gone under 2.5 total goals, which doesn't tell us much about how their next game might go.

The best stats and odds for Rayo Vallecano vs Osasuna

If you want to bet on the top odds for the Rayo Vallecano vs Osasuna duel, check the odds we selected from the top UK bookies right here:

Neither of the two teams is doing that great right now, so this could be a very close game. Let's take a more detailed look into the teams:

Things haven't been going that well for Rayo Vallecano lately. While the team is still in the top half of the standings, they have lost four of their last six games in La Liga, along with one win and one draw. Meanwhile, the team reached the semi-finals of Copa del Rey, which is a huge success in itself, but they've lost the first leg at home 2-1 to Real Betis just a few days ago.

Rayo Vallecano will have to manage without Jose Pozo, Unai Lopez, and Martin Merquelanz in their game against Osasuna, but all the other players are healthy and ready to play.

With two wins, one draws, and three losses in the last six games in the league, Osasuna has been pretty inconsistent lately. However, the team enters this game after a draw with Sevilla, the second team in the standings at the moment. Osasuna is currently in the 11th place in the table, but they could get to the top half if they can manage to beat Rayo Vallecano.

Nacho Vidal and Darko Brasanac are back in the team after they served their suspensions, but Jesus Areso and Aridane Hernandez are still out with injuries.

FAQ for Rayo Vallecano vs Osasuna 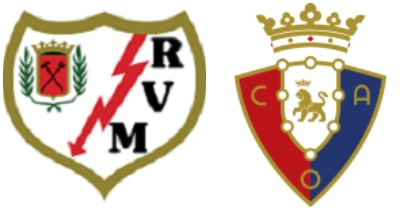